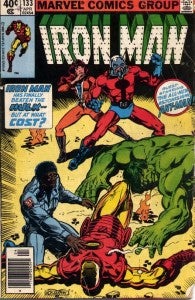 Anybody remember when, not that long ago, filmmaker Edgar Wright said he hoped to shoot “some Ant Man” this year? Fans and critics circled that statement trying to figure out exactliy what “some Ant Man” meant, and now it looks like we’ve got our answer: rumor has it Wright will shoot the post-credits sequence for Iron Man III, which will introduce Ant Man into the Marvel Cinematic Universe.

Geekscape quotes from the Playlist podcast that before actor Andy Lau pulled out of the film after the birth of his first child recently, it came out that he was intended to play a “very different version” of Radioactive Man (the Marvel version, not the Simpsons character). According to Playlist, the character will appear onscreen with Ant Man in the post-credits sequence, which may be filmed by Wright.

Wright, best known for Shaun of the Dead and Scott Pilgrim vs. the World, has been talking about Ant Man for a couple of years now,  and Marvel Studios have recently been saying that the film was closer than ever to being a reality, but no release date for the film has yet been announced, and neither has a start date for production, or even a star. There’s been some speculation that there may be some movement on at least one or two of those questions at next month’s San Diego Comic-Con International, and some rumors have Nathan Fillion being considered as the shrinking hero.

Iron Man III is presently filming in North Carolina, and will split time in China and Miami, as well. The film will be in theaters next May.

How Marvel's What If...? Recast Integral MCU Characters And Voices (Exclusive)

Warner Bros. Tried to Sell James Gunn on Superman Before The Suicide Squad