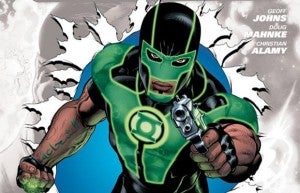 Superhero costumes get redesigned all the time, for any number of reasons. There are story reasons, trademark reasons, merchandising reasons and, once upon a time, it used to drive enough interest to change it for sales reasons all on its own.

While it's unclear what motivation, exactly, there is for adding a new Green Lantern--an apparently-Arab one with a tattoo and a pistol in his hand--or for redesigning his costume to look more like an S&M gimp suit filtered through Mark Millar's Kick-Ass, that cover jumps right out at me as one of the worst of the 55 mainstream superhero titles DC will publish in September.

Here's the thing about superhero redesigns: good ones will often stick with you for a while, but then just fade into the background of the character's look and stop being something you really think about. Because of the cyclical nature of mainstream superhero comics, no change tends to take hold for long and so the bad ones are forgettable. It's only the truly atocious ones that remain a part of the conversation forever.

So here's a look at some of the worst, most misguided and hideous superhero redesigns of all time. I'll be the first to admit that I'm not an authority on the matter--the last time I talked about some awful hairstyles, almost all of the readers disagreed with me, and I actually have a soft spot in my heart for a couple of the looks on this list, which are included for the simple reason that they're objectively bad in the opinions of the broad majority of the audience.

Keep in mind, by the way, that this is just about the actual design aesthetic, not about whether or not the stories worked. Something like the ghost/angel Punisher doesn't count, becuase frankly while it was the worst idea ever foisted on a character who had seen his share of bad ideas, it didn't look sufficiently different from his regular outfit to really stick out on the shelf as monumentally ugly. 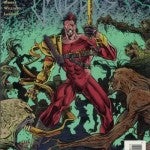 Granted, Doctor Fate's traditional look just screams "Golden Age" in a way that probably hurt its ability to connect with the EXTREME and jaded fans of the 1990s.

This one has it all, folks--the unnecessary buckles and pouches, the gargantuan shoulder pad, the hair dye and tattoos--this guy is as '90s as they get and one of the most self-evidently silly redesigns of the post-Zero Hour era. It's also one for which almost nobody has a soft spot because the book just wasn't that good.

The other Zero Hour-related entry on this list, Guy Gardner: Warrior, was actually a pretty good book and has a small-but-vocal group of fans as a result who will tell you (and probably me in the comments thread) it's not really that bad. I've never heard anyone say anything positive about Fate. 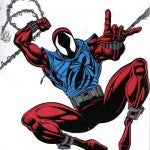 There are those who have a connection to this costume, simply becuase Ben Reilly is not without his fans.

That said, the hoodie was just silly and, combined with virtually nothing else interesting going on with the costume and the fact that they jettisoned one of the most perfectly-designed and classic superhero costumes of all time, the change was obviously a huge mistake.

And they gave it up in order to take one on that is remembered only becuase it's such an artifact of a particular, and very bad, time in the Spider-Man Universe. 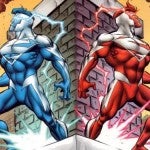 I actually thought that, in spite of the fact that it was never handled particularly well, the "electric blue" Superman costume was both a clever idea and a fairly interesting design.

That said, dividing the character in two and playing up the old Superman Red/Superman Blue idea from the Silver Age took it a step too far and pointed out how preposterous the look (and the story) actually was. Having Superman on the page, arguing with himself, was a huge jump-the-shark moment for the whole endeavor. 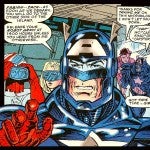 When Captain America's Super Soldier Serum became corrupted and his body started to eat itself from the inside out, he was given a suit of armor by Tony Stark--that's something that happens a lot in the Marvel Universe, as we've seen from characters like Spider-Man, who get it at times convenient for the plot.

The suit itself was huge, bulky and somewhat ridiculous-looking, reminding fans that part of the reason Iron Man's costume works is that it's the only way we've ever seen it. When you just paint the Captain America costume on top of a Japanese battle mech, it doesn't look cool or innovative; it looks like one of those Batman toys they make for kids, where the bat-symbol just gets painted on top of a SCUBA suit to sell a few extra toys.

And worse, it wasn't even the only character doing this at the time. Everyone was getting bigger and sillier-looking, influenced by a generation of Dale Keown ande Rob Liefeld art; and many characters who had armor or microcircuitry integrated into their existing costumes were essentially downgraded to more "realistic" costumes that looked like this, with gauntlets and a silly helmet and gargantuan shoulder pads. Booster Gold had one for a while, too, in an era so bleak that the character's creator, Dan Jurgens, fixed the change as quickly as he could once he got his hands on Booster after Extreme Justice ended. 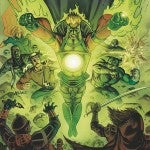 Before Alan Scott became a controversial figure because of his sexuality, he was a Justice Society member who had a really hard time finding a niche for himself as he was replaced by an army of thousands who took on his name and powers beginning in the Silver Age and then settled into a nice, long period where he couldn't seem to hang onto a costume and a codename for a long time.

The last one he got before the end of the old DC Universe had descended so far into madness and parody that it sticks out in my mind as the single worst superhero costume I've ever seen in my life. There isn't even anything remotely close for me--it's like Cathedral, the character form Kingdom Come who dressed up as the bulky edifice of a church, but without any sense of self-conscious humor about it.

I guess The Invisible Woman is the best possible candidate for this costume. Why? Because at least she can hide from it.

Thigh-high boots and elbow-length gloves (all in white) along with garters on both lets and biceps, are the least of this costume's problems, with a preposterous hooker-bikini design that does its best to show as much of Sue's skin as humanly possible.

This is a character who by this point had been married to one of the Marvel Universe's smartest men for years; she had a pair of kids, and was a respected member of the superhuman community. And yet she's prancing around fighting criminals in an outfit clearly designed to burst off her at any moment.

Then there's the fact that it fails at the one and onliy thing it can credibly be said to be attempting; the whole thing is so odd and awkward to look at that it's not remotely attractive. So there's officially no way to justify it.

Spinning out of the continuity-altering events of Zero Hour, Guy Gardner was retconned as an alien being who had been living on Earth for decades as a human without even his own knowledge. As the last surviving Vuldarian, it was his destiny to embrace his newfound powers and use them to defeat the vicious alien race that exterminated his species.

Of course, all of this was well-timed, since DC had decided at the time that Kyle Rayner should not only be the only Green Lantern but the only guy with a ring in the DC Universe. Sinestro and the Green Lantern Corps were dead, slain by Hal Jordan in a fit of madness, while Alan Scott's and Guy Gardner's rings were destroyed, also by Hal, leaving the two to find the power (literally) within themselves.

So a reboot was necessary, but few fans would tell you they were looking for a version of their favorite sci-fi bad boy who was reinvented as a jungle-hopping barbarian with nonsensical tribal tattoos from head to toe.

There was a long period of time when, in spite of being the most popular character in comics, nothing that Marvel did to Wolverine made a lick of sense or was good for the character for even a minute.

This is one of those things.

Following having the adamantium removed from his skeleton during the Fatal Attractions crossover, he wandered the earth for a while with just his bone claws. Eventually, he started to regress to a more animalistic, feral state, and (among other changes) decided to forego his traditional mask in favor of just a bandanna wrapped around his noggin. It would look ridiculous on any character, but frankly Wolverine's costume would also look ugly on almost anybody and ultimately the combination of the two were just a depressing combo. 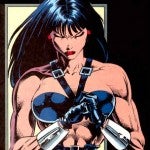 Wonder Woman is a princess of a proud race of warriors; she should be powerful and regal. That's one of the reasons that the whole hubbub over pants recently annoyed the heck out of me; of COURSE she should be wearing pants, or at least one of those Greek warrior-skirts like Brad Pitt wore in Troy. When was the last time you saw royalty running around in a bikini?

Well, this one made the bikini look downright dignified. It was an odd combination of a biker outfit and fetish gear, with baseball batting gloves and a jean jacket.

I mean, all the other crimes against fashion notwithstanding, who wears an entirely leather outfit and a jean jacket on top of it?! 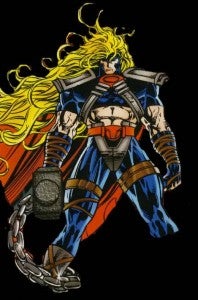 From artist Mike Deodato, the mastermind behind the Wonder Woman design above (hey, at least he's an equal-opportunity midriff-bearer), comes this bizarre iteration of Thor that looks like what Tambi Baker from Strangers in Paradise might look like if she stole an outfit from Glory and took it to the world of Mad Max.

It's hardly a good look on a Norse thunder god.

Is Green Lantern #0 Among the Worst Superhero Redesigns of All Time?