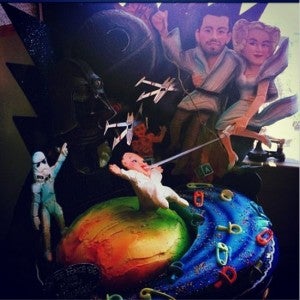 Before Jaime King played Lemon Breeland on Hart of Dixie, she had a long history of connections to Star Wars. Jaime King appeared in the movie Fanboys, which was directed by her husband Kyle Newman.

Jaime King also worked on the TV series Star Wars: The Clone Wars from 2009 to 2012. So it should probably come as no surprise that Jaime King's baby shower had a Stat Wars theme.

King shared the photo above via Instagram of the Star Wars cake served at her baby shower. Inscribed on the sake was “May the force be with baby Newman."