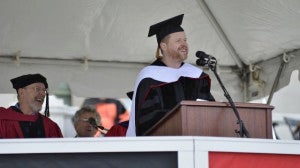 Earlier today, Marvel's The Avengers director Joss Whedon delivered the 181st commencement speech at Wesleyan University and said that he wanted to be more uplifting than Bill Cosby, so he would remind everyone that they were going to die. It made more sense in context. Also, that Whedon went to the same school as Ted Mosby, the fictional character who has spent most of the last decade on How I Met Your Mother chasing a character by Avengers star Cobie Smulders, didn't escape our notice. Thanks to Tor, you can read a transcript of Whedon's speech below. Surprisingly, no video of the speech has appeared online yet. If we see any soon, we'll update.