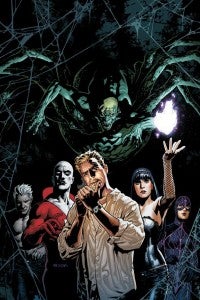 Jeff Lemire's first issue of Justice League Dark, out today, has been promised as a turning point in the series, and reportedly ties DC Comics' most unlikely group of heroes ever to hold the title of "Justice League" into Neil Gaiman's Sandman. And to recognize and promote the issue, YouTuber Diego Villalba has put together a snazzy trailer for the issue. These trailers, put together by fans or creators on the books, have become more and more prevalent since the launch of DC's New 52 relaunch initiative, with certain books even running them monthly. The team squares off, according to solicitation text and the video, against Felix Faust, a classic Justice League villain, last seen by most fans in 52, who seems uniquely well-suited to battling a "magical" arm of the League.

"I'm pretty damn excited to be writing Justice League Dark," Lemire told the DC blog back in January. "And I hope you'll join me as I take you and these characters into the darkest, strangest corners of the DCU and beyond!"

Justice League Dark #9 Gets a Trailer