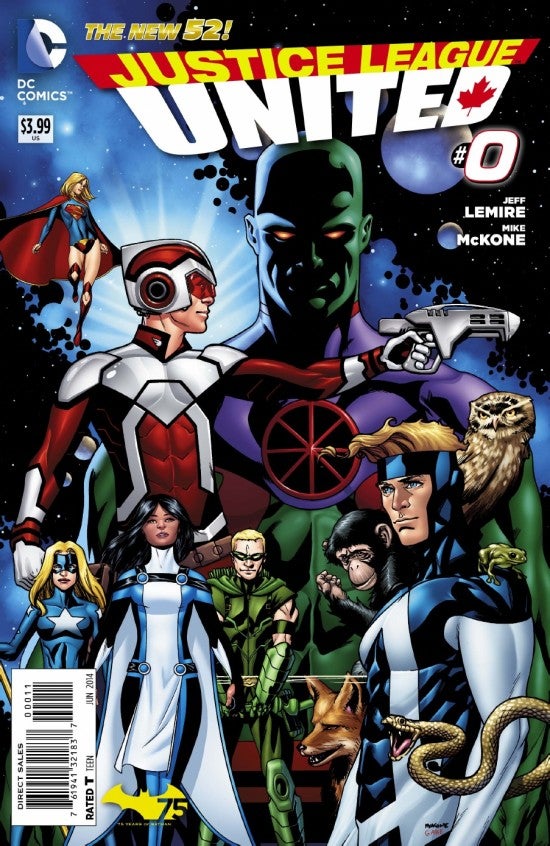 Jeff Lemire and Mike McKone's Justice League United, the successor to Justice League of America that debuted last week to a great deal of fanfare on account of the introduction of teen, Cree supeheroine Equinox, is not just surprisingly good -- it's possibly the best, most enjoyable first issue of a new superhero title in a couple of years. Not since Kelly Sue DeConnick's first issue of Avengers Assemble have I been so excited for the next installment of a superhero team book (with due respect to Aquaman and the Others, which had an admirable opening chapter earlier this month but which remains nevertheless basically an Aquaman solo book with a large supporting cast in my mind). While much of DeConnick's run was sidetracked by crossover events (such is the fate of the Avengers scribe), she managed to make brilliant use of the stories where she could actually tell her own tales and craft the kind of comic you don't see much anymore -- and the kind that, if this first issue is any indication, Lemire and McKone are crafting with Justice League United. Having "grown up" as a reader in the '80s and '90s, most of my favorite titles included strong supporting casts who played a role in humanizing the heroes, grounding them and making them relatable without falling back on "realistic" worlds or grim and gritty presentation. As such, team books aren't exactly up my alley. 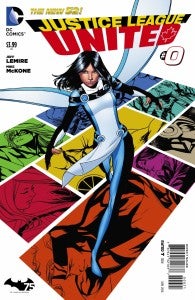 With so many characters to showcase, it's almost mandatory that nobody without super powers get more than a few panels of "screen time," and that, for me, tends to make the stories big, dumb action movies. Many superhero team books are extended fight scenes at worst and war movies -- mostly fighting, but also with a little bit of melodrama and strategy peppered in -- at best. That can be perfectly fun, but it just...isn't for me. So once in a while, when a book seems to find a way to genuinely drive the characters forward and be interesting without losing the sense of scope and stakes that are required to believably force a half-dozen of the most powerful people in the world to work together, it's a treat. This feels a bit like the Keith Giffen/J.M. DeMatteis Justice League #1 -- and in a good way. While the book took on a more and more lighthearted tone as it went on, and later miniseries and reunion tours proved a bit on the zany side, the original Justice League/Justice League International books aren't just beloved because they were "funny." They treated the characters (or most of them) as fully fleshed-out people, while still making the battles they were fighting feel like they mattered. Because we cared about these characters, and knew who they were outside of just the barest of personality traits, the stakes were higher. Lemire skillfully brings that same feel to Justice League United, and McKone is as solid a counterpart to Kevin Maguire as you're likely to get; many of their strong suits (expressive faces and bodies, a solid sense of storytelling and composition) are shared, so if you're going ot have a similar TYPE of book (bear in mind, almost nothing Lemire does here is actually something Giffen and DeMatteis did, so it isn't as though it's a rip-off or something), bringing on board a similar type of artist to bring it to life can't hurt. The issue does a nice job of dropping you right into the action -- it starts with the team already formed and striking against a group of aliens who are apparently kidnapping and experimenting upon other beings (in a way that's eerily similar to elements of Animal Man's origin, something that isn't commented upon) -- before easing back on the throttle, cutting to "three days earlier" and giving some background on the nature of their (seemingly failed) mission from the first few pages. 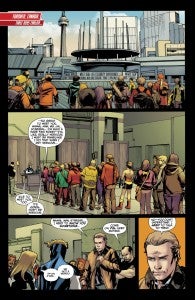 On the first page, incidentally, is a fun, clever little Easter egg that, when I look back, fits the tone of the story perfectly and maybe should have been a heads-up for the kind of story the authors had in store: the information given about the location of that first scene cites the Encyclopedia Galactica as being its source. "Encyclopedia Galactica" has a number of meanings if you go digging around online, but seemingly the most likely thing that he's referencing here is from The Hitchhiker's Guide to the Galaxy, in which the Encyclopedia Galactica is the more staid and credible -- but ultimately dull and unsatisfying -- alternative reference source to the titular book. It's worth noting that Adam Strange and Alanna's marriage is another one that seems to have gone up in smoke as a result of the New 52's reboot. Superman, The Flash and others who were previously married were "de-aged," their relationships rolled back to Silver Age status quos, and it seems Strange, too. It's interesting that the de-aging doesn't seem to have affected Strange, who has a doctorate and whose general appearance gives the impression of a man about ten years older than any of his future Justice League teammates. (Bonus points for the beat where Martian Manhunter calls him "Dr. Strange," a character who appeared five years after Adam Strange's first appearance but whose success more or less precludes most writers from acknowledging Adam's day job as a person with an advanced degree.) One of the only marriages left intact is Animal Man's, in part because his wife and kids were used so effectively during his iconic run on the title (which runs contrary to the conventional wisdom that married characters are inherently disinteresting, but that 's a whole other issue). 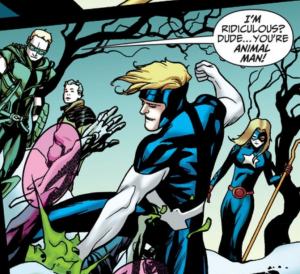 It's easy to guess why Green Arrow and Animal Man will have issues -- as has been teased in numerous interviews that Lemire has done in support of the title. The pair are opposites, and not in the way that Green Lantern and Green Arrow are. Rather, Oliver Queen is a wealthy and famous person in his own right who hides behind a mask as Green Arrow. Meanwhile, Buddy Baker courts wealth and fame, and uses his powers and superhero identity as a means to do so. The same goes for Stargirl, but somewhat less so...and it would be difficult to set her up as a foil for Oliver without it seeming like he's picking on a kid. The fame angle is one that Lemire had in his arsenal during his Animal Man run but it wasn't a central part of the way Buddy was depicted. In a team setting, though, it's clever because it's one of the handful of things that sets him aside from the superhero crowd without eating up page count by bringing his family in. And that's where this issue succeeds. Unlike most "bringing the band together" stories, it's focused more on who these people are than just what they do and how they're convinced to join the team. There is, in fact, not much in the way of convincing in this issue at all as the heroes act independently heroic, almost as if it's in their nature. Equinox is an interesting character, and one that you want to get more of. We meet her best friend and her grandmother, establishing for her more of a supporting cast than some New 52 titles solo titled had when they launched. Meanwhile, the first use of her powers -- odd and baffling and disorienting for the reader -- feels like a scene pulled out of Lemire's acclaimed Animal Man run. It's a title that wrapped up when he left, and that by all accounts he mostly left so that he could do this book without stretching himself too thin, so it's interesting and potentially good to see that sensibility being carried over to a new work. 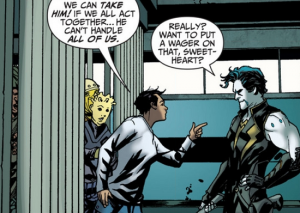 Alanna, though, is easy to fall in love with. In the course of a few panels, the book manage to not only allay any lingering skepticism I might have had about "Twilight Lobo" (I admittedly did not read the well-reviewed Villains Month issue featuring the character), but once it established him as the same old Lobo, immediately set about using his established badass-cred to prop up Alanna by having her -- remember, a college girl with no powers -- stand up to Lobo, in spite of knowing just who he is. It's a less inspirational and less dramatic moment than the classic Captain America/Thanos showdown in Infinity Gauntlet but it's in the same vein and it tickles the same part of the brain. If there's a weakness to the title, it's that McKone's style isn't particularly well-suited to the kind of twisted, monstrous thing Lemire asked him to depict there, and it came off as a bit cartoony, and a little jarring since it's not used throughout. If that turns out to be a major part of the storyline going forward, though, a bit "cartoony" doesn't conflict with the feel of the book particualrly and it would be less jarring, I think, if it was done page after page. So what feels like a weakness on one page or two here could very well be nothing of the sort in a broader context. For an example, look to the Bloodlines storyline (I know, I know, but stick with me), or Guy Gardner: Warrior (again, wait for it) -- both of which saw Mitch Byrd display a skill with drawing grotesque monsters and strange, gory alien stuff that was head and shoulders above all but the most talented of his more photorealistic peers. Overall, the issue -- nominally a #0, but why that is remains unclear because it doesn't feel like the kind of filler that usually populates those -- is incredibly strong. It manages to cram as much personality into the issue as did most of the more character-driven and world-building #1 issues in the New 52, but without feeling like it's labored and weighed down by exposition (as were many of those). Some of that is less to Lemire's credit than it is a function of time and place -- everyone here except Equinox and Adam Strange have already been introduced to the readers. Much of it, though, has to do with the creative team crafting a vision for this book that feels at home in the world of the New 52 while still being radically different than the relentlessly grim books that have borne the "Justice League" banner over the last two years.

Justice League United Review: One of the Best New Superhero Books in Years