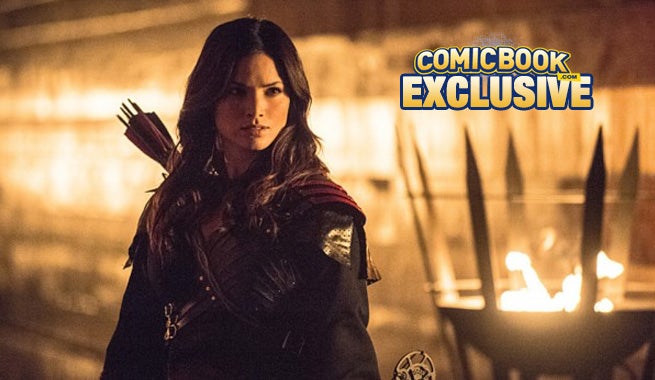 Nyssa may have been absent for the couple of episodes of Arrow but according to Katrina Law, she's got some big plans and we'll see them soon.

We recently had the chance to talk with the young woman responsible for bringing Nyssa to life of the CW in an exclusive interview. She spilled some of Nyssa's perspective and says it's not "if," but "when," she takes the role of Ra's Al Ghul from Malcolm Merlin!

CB: How is season 4 of Arrow treating you so far?

KL: I love being a part of Arrow. I love being a part of the DC world. I love Nyssa. I think she's an amazing character and I think the writers have done such an amazing job making her complicated and complex. Her storyline is just taking her from the highest points down to the lowest. There's a lot of room for growth and for play when it comes to Nyssa. This season has been great, especially with the return of Sara, so it'll be interesting to see where that relationship ends up going if it goes anywhere. And also, with Nyssa fighting Malcolm Merlin for the title of Ra's Al Ghul, there's so much to explore!

Yeah! What's going on there? Are we going to have a female Ra's?

As far as Nyssa is concerned, yeah, and very soon. That's what she wants for sure. I don't know if that's what the writers are thinking but in Nyssa's mind, it's happening!

If Nyssa ends up becoming the next Ra's Al Ghul, will she support Oliver who is certainly in need of some help to defeat Damien Darkh or will she just prioritize the League's best interests.

You know, I feel like, (and I'm just gonna say "when"), when Nyssa gets her throne, the League of Assassins will always be her first priority. Whether or not your agenda falls within what the League of Assassins believes in will dictate more of whether or not she will help you. But when it comes to Team Arrow - I think because of the Lance sisters - Nyssa definitely has a softspot for Team Arrow. I feel like, if they were desperate and needed her help, she would most likely lend a helping hand.

Sara just came back and seems to be becoming herself little by little, would Nyssa be interested in exploring a relationship with her again and possibly bringing her to Nanda Parbat to assist with the League of Assassins or even be like her Queen?

I feel like at this point, Nyssa has found a way to gently release Sara and hold onto the memory of her. I'm not really sure where she's gonna stand with Sara coming back even though she is back to normal. I do think that Nyssa is going to understand that she's on her own trajectory and coming out of the Pit is going to leave a lasting scar and effect on her and she's definitely not going to be limited to the League of Assassins. I think Nyssa would understand that she would have to go on her own path and hopefully they would cross paths in the future.

Yeah, well, the Lazarus Pit changes you. I think that if it was old Sara, then for sure but...

It is to fulfill the legacy but it's her rightful place. She was born and essentially told from birth that that's what she was born to be... To become Ra's Al Ghul, eventually. So, when it's ingrained in your head that this is your rightful place, that you're your father's successor, then essentially it's almost like leaving family land to a corporation. It's like, "No, this is my land, I have to fight for what is rightfully mine."

Does that change her view of Thea since her father is posing as Ra's Al Ghul?

I don't necessarily think Nyssa is threatened by Thea at this moment, not to say that she won't be in the future. I think right now her main priority is that it won't even get to that point where she'd have to battle Thea because she just plans on taking Malcolm Merlyn out.

Are we going to see a showdown in the near future between Nyssa and Malcolm?

I hope so! It would be a lot of fun just to film it.

You guys do the coolest action on this show. How much of your stunts do you get to do?

That's thanks to James Bamford, our stunt coordinator. He's amazing. My stunt double, Atlas Mitchell, is amazing because she makes me look cooler than I actually am. When I was on Spartacus, I did 100% of my own stunts but I also wasn't jumping off of high buildings or falling on silk ribbons or jumping off of cars onto other moving cars. I wasn't doing anything too crazy. On Arrow, they have a lot of stunts where they go, "Now, you slide down this rope, run down that bridge, land on a car, take out four assassins on the way down, throw these tiny stars, catch the ones being thrown at you, and..." Yeah. I'm like, "You know, she's trained for this and probably won't fall on her face doing it," so I'm very happy to give up my power to Atlas. She makes me look good. She's talented. She's amazing but then too, they are very kind with the scenes that I can do, which is the hand to hand combat or just the minor sword play. They just tell you to go at it. I also think that the majority of the cast, other than maybe Stephen Amell aside from jumping on a moving car which he may be able to do, he's actually very capable of doing all of his own stunts, but I don't think insurance-wise they want the actors doing that which is a big reason a lot of the actors have stunt doubles.

Yeah! Stephen Amell is very capable of doing his own stunts, though.

With Legends of Tomorrow and the Arrow/Flash crossover coming up, are you going to be a part of either of those?

There's a possibility! I don't know for sure. I think that's the way they're building the Universe. Any character from any of the three shows can crossover and whether or not it's on Legends of Tomorrow or on Arrow, I would still love to see some flashbacks of how Sara and Nyssa met and their training and how it led to where they are now.

Has there been any talks or plans for those types of scenes to happen?

Yeah, there's been talks of that happening. I think it's just waiting for it to come to fruition and if it would work in the script and whatever story they're telling at the moment.

The DC properties on TV are great, even outside of Arrow, Flash, and Legends of Tomorrow... There's Gotham. There's Supergirl. Do you keep up with any of the others?

I saw the pilot for Supergirl and the rest is on my DVR and I'm stoked and I love it and I'm so excited that there's this female super hero with moral values who isn't wearing a skimpy costume for little girls to look up to. I wish I would've had that growing up but then I wanted to be Batman. I love the show. I think Melissa Benoist is so charming and did a great job. I loved her on a couple of the other things I've seen her do and I'm not gonna lie, I actually teared up when I watched it. It was such a beacon of hope and power for the younger female generation and I'm excited for them to have that to grow up with. So, thank you Greg Berlanti for creating this amazing DC world on television.

You kind of answered my next question: If you could play any super hero who would it be and why?

I would've rocked at Batman. I would've figured out how to growl my voice.

JoJo's Bizarre Adventure: What To Know About JoJolion