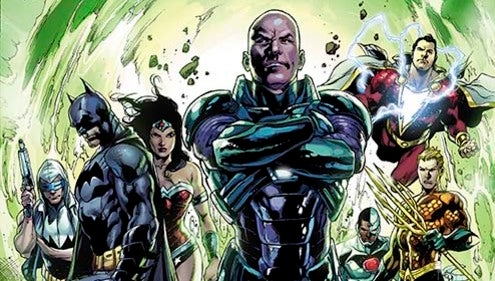 "The Justice League is going to go through a lot of changes, obviously, in the wake of Forever Evil," Johns explained. "A lot of the blame can be put on their shoulders for what has happened: They were infiltrated and they fought each other and that led to the unleashing of the Crime Syndicate and the evil that took over the world."

As it has been since the launch of Forever Evil, there's an element of exploring the shades of gray that exist in the world, with "good" and "evil" not being as clear-cut as they were before and characters "seeing what kind of heroes it will take to not just protect the world, but defend the world," Johns said. 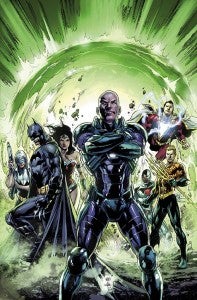 It won't be easy for anybody; the team's dynamic will be challenged by having an egomaniac (and someone they don't trust) like Luthor around, and that goes double for Flash villain Captain Cold, who will also join the team as their arch-nemeses leave. One assumes those two will pop back up, possibly in Justice League United or a new team title of their own, but there's no official word on that just yet. Green Lantern (whose archenemy just got his own, ongoing monthly title) is also absent, and Johns has hinted that Ted Kord will play a role in the series going forward.

"With fame and spotlight comes scrutiny and detractors," said Johns, hinting at what surely will be a problem for Luthor. "I think the most interesting thing is that Lex doesn't realize what it's like to be a superhero, what the life is like. You make enemies, they attack you on a personal level. And he's just Lex Luthor. He has no codename, no mask," he said. "He has to deal with the ramifications of that."

Given the fact that the Man of Steel movie universe doesn't yet have a villainous Lex Luthor, and the character will likely be introduced in Batman vs. Superman as a not-wholly-evil (at least at first) character, one might wonder whether the long game here is, like Marvel has done so expertly, to craft comics that are at least somewhat in sync with their movie universe...but that would just be speculation.