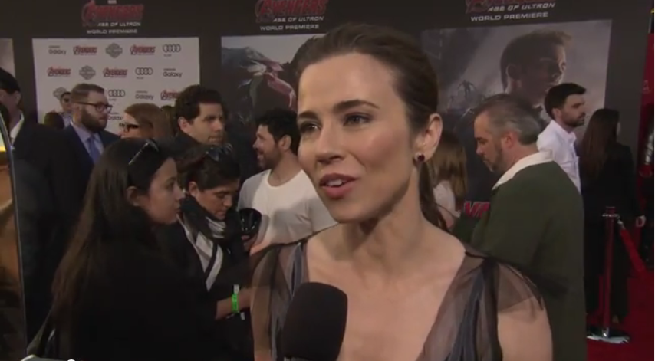 With Avengers: Age of Ultron out just a week, spoilers are becoming more and more difficult to avoid, so fair warning as Linda Cardelini herself explains her role on the red carpet when being interviewed by Marvel. So, obviously, this is one of the movie's bigger spoiler moments, and if you haven't seen the film and wish to advert your ears and eyes, now's your chance.

When announced as part of the film, Cardelini's role as Laura Barton, Clint's wife, was a heavy-guarded secret, as she explains she didn't even tell her mom, which upset her a tiny bit. Cardelini also goes into details on what makes her character so important and gives depth to the Hawkeye character.

"I love that that's a place they can go," she explains, "and my character has a really wonderful relationship with her husband and that it's a surprise to everybody."

Cardelini also praises Jeremy Renner's performance as Hawkeye. "He's such a great actor and I admire his work. Being able to work with him was wonderful." She also loves that Laura is "the rock he can come home to." With Hawkeye not having any real defining character moments in Thor and the Avengers, having a family off the grid made Clint the MCU's first family man. Sorry, Scott Lang. Almost had it.