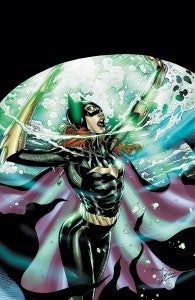 Sometimes there are events that cannot be viewed in a vacuum and must be taken in the context of what's going on around them. It seems as though Gail Simone's being fired as the writer on a consistently "top 40" Batgirl book series is one such event, particularly coming as it does within a week of Karen Berger stepping down as Executive Editor & Senior Vice President of DC Entertainment's Vertigo brand. At a time when the way women are treated in the comics industry and depicted in comic books is being more hotly debated than ever before, the loss of DC's two strongest female voices within a week certainly seems to send the message that those voices are not welcome at the publisher. (And, yes, Diane Nelson is in charge of DC Entertainment - but you'd be hard-pressed to find anyone in comics who would take the position that she does as much for the well-being or long-term viability of the company as Berger does.) Even assuming that Berger left of her own volition and was not shown the door, no sane person could look at the departure of Berger and say, "You know what would go a long way toward giving the readers confidence in our current direction? Firing the best-known and best-selling top-line female creator we've got." Of course, timing can be a tricky thing; Gail Simone did nothing to hide the fact that her DC exclusivity deal wrapped last weekend, leaving her free to pursue other opportunities. She also discussed online having conversations with editors and artists -- and while she certainly didn't specify that they weren't DC's editors and artists, the company would certainly know that. If the decision was made a while back -- say, when Simone left The Fury of Firestorm the Nuclear Men in what's reported to have been an acrimonious split -- that she'd be relieved of her duty when her exclusive contract was up, it's understandable that DC would have an impulse to follow through on that. Still, as suggested above, it seems that given the problems they (and the comics industry in general) have had alienating with female readers and creators in the recent past, this move was poorly timed from a PR standpoint. In the midst of some of the recent controversies surrounding the way female creators, fans and characters are treated, Simone (while known to fans as an ardent feminist) could be counted upon to be the voice of moderation, standing up for creators like Scott Lobdell (one of DC's most prolific creators these days) when he came under fire from fans accusing him of misogyny and abusive behavior toward female fans. On the other hand, DC has never acknowledged the controversial remarks made by JSA: The Liberty Files artist Tony Harris, who famously called Simone a "**********" long before he became an Internet-famous symbol for abusive language toward comic book convention-goers. Simone, who shared an employer with Harris when it blew up last month (he's writing a sequel to The Liberty Files, rolling out in January), responded by declaring the day after the story exploded to be "Cosplay Appreciation Day" and launching a social media campaign aimed at rejecting Harris's message without necessarily calling him out personally. DC may not have particularly appreciated that. If that played a role in the timing of Simone's firing, it would be particularly galling for her supporters since both Harris and Guardians of the Galaxy director James Gunn have more or less been able to skirt a lot of the issues relating to what they actually said when threats of boycotts drew sympathy for the creators in question, with fans and other artists coming in and saying, "How can you take his job away for having an unpopular opinion?". In any event, the way this unfolded seems primed to explode on the comics internet. The timing of the events coming fast and furious, coupled with a series of these high-profile fights between creators, journalists and others in the comics community, is a bomb just waiting to go off in the middle of an already-volatile conversation. And going back to the business end of things - the future for both Vertigo as a brand of DC Entertainment and Batgirl as a title from DC Comics are pretty uncertain here. Batgirl has been a difficult sell for years, and the decision to switch back to Barbara Gordon as the series' principal lead rather than keeping Cassandra Cain or Stephanie Brown was nominally made because she's a more iconic, enduring character among casual fans and had the potential to draw big numbers. Compound that by adding Simone, one of DC's hottest writers and someone beloved by the Batgirl fan base, and you had a recipe for success on the book. Now, a year and a half in as the shine is starting to come off the New 52, losing Simone presents a unique challenge that even something like Firestorm didn't face: how do you replace a writer like that? If DC's history tells us anything, it's that they're unlikely to replace Simone with another A-list talent who has a long-term plan for Batgirl. Rather, they're more likely to put a Band-Aid on the problem with a new "ongoing" writer who's a glorified fill-in and only guaranteed six months. Not long ago, in a discussion on the relative merits of returning to Barbara Gordon and so aggressively removing other Batgirls from even non-canonical stories like Li'l Gotham and Smallville, I drew a comparison to the Green Lantern titles in the '90s that spoke to this same issue. Quoting myself here, from a message board post:

The problem with that logic - "They believe that Cass and Stephanie water down the Batgirl legacy and make Babs less iconic" - is that it's the same nonsense they used for years to justify keeping Kyle Rayner as the One And Only Green Lantern and keeping the Corps and the rich mythology of the Hal Jordan era out of print. Ron Marz has said repeatedly over the years that he wanted to have the opportunity to put his spin on those concepts and was turned down, much like Gail has expressed a desire to work with Stephanie and Cassandra. How'd that work for them? A temporary uptick in sales that sank over a sustained period of time until they were low enough that DC was willing to put all their money on red and hand things over to Geoff Johns.... ...Who made the franchise a success by embracing everything the publisher had been so dedicated to avoiding. Do you think Gail will last the--what? 100 issues or so?--that Marz made it on Green Lantern? In today's comic book market, that's unlikely; almost nobody does that anymore (excepting Peter David and Johns himself). And once she's gone, what are the odds that they hand the title over to another A-lister who keeps it on the radar? Probably more likely that the next writer begins the gradual sales/quality descent that will ultimately end with a philosophical change by editorial.

Vertigo's future is no more clear; with only a couple of ongoing titles remaining, do they roll those over into DC's main line? Do they re-brand Vertigo as a line of original graphic novels, which would cater to the bookstore market where their product does best? In any event, it's hard to imagine them bringing in the same caliber and quantity of talent without Berger. Which, ultimately, goes a long way toward supporting fan fears/theories about this being the end of the line.

Pokemon's New Short Has Created One of This Year's Best Memes

How I Met Your Father: The Pilot's Huge HIMYM Easter Egg

Will Call of Duty Now Be Exclusive to Xbox?