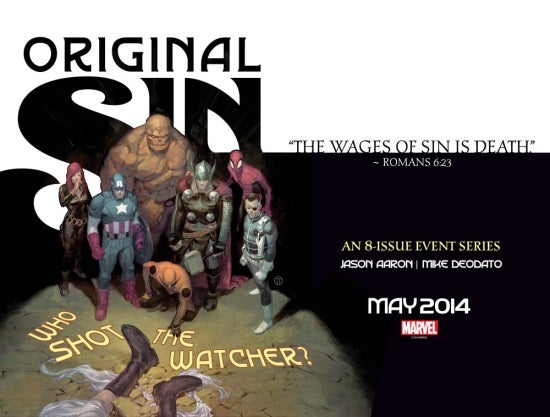 Marvel Comics has released a trailer for Original Sin. The first big Marvel Comics crossover event of the year, Original Sin is written by Jason Aaron with art from Mike Deodato and revolves around the murder of the Watcher and the secrets that are unveiled following his death.

Who Shot The Watcher? The Watcher, the mysterious space-god who's been watching us from the moon for as long as we can remember... is dead. Thus begins the greatest murder mystery in Marvel Comics history. As Nick Fury leads the heroes of the Marvel Universe in an investigation, other forces are marshaling as well and other questions are arising. Why is Black Panther gathering a secret team of his own, including Emma Frost, the Punisher and Dr. Strange? Who is the Unseen? What was the Original Sin? What was stolen from the Watcher's lair? And most importantly, who now holds the Marvel Universe's darkest secrets in the palm of their hand? ORIGINAL SIN is available May 7th in comic shops, the Marvel Comics app (for iPhone®, iPad®, iPad Touch® & Android devices) and online in the Marvel Digital Comics Shop. Trailer Voice-Over by Jesse Falcon.