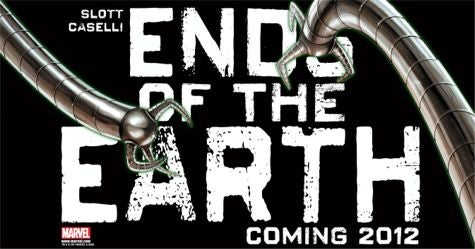 If you don t look closely enough, Marvel Comics looks like they might be teasing the end of the earth in 2012, which would be appropriate considering the Mayan calendar. However, the s on ends is being obscured by the end of a mechanical arm. What Marvel Comics' message actually reads is that the Ends of the Earth is coming in 2012 in Amazing Spider-Man, which might mean that Spidey is about to do some traveling. Of course, the mechanical arms are also teasing the return of Doctor Octopus. Also, the names Slott and Caselli appear in the teaser, so it s likely that Dan Slott will be the writer on the Ends of the Earth storyline with artwork by Stefano Caselli.

Marvel Comics Teases Ends Of The Earth In Amazing Spider-Man