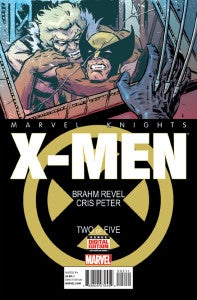 Marvel Knights: X-Men is a five issue mini-series written and drawn by Brahm Revel, with colors by Cris Peter. The relaunched Marvel Knights line is intended to be a place for creators to take decidedly different approaches to Marvel's iconic characters and, two issues in, Revel is making good on that promise.

The series began with the X-Men becoming aware of mutant murders occurring in Appalachia. Wolverine, Kitty Pryde, and Rogue decide to take a road trip (I guess the jet was too conspicuous?) to the tiny, isolated mountain town to investigate. Once there, they meet a young mutant girl and take her under their protection, unaware that the town's sheriff has assigned her the task of ridding the town of its unwanted mutant visitors.

The first issue ends with the X-Men's search leading them to a cabin in the woods outside of the town. Upon entering, they find Sabretooth waiting for them. The second issue picks up where the first left off, with Wolverine battling Sabretooth. It quickly becomes clear that things aren't what they seem when more and more of the X-Men's enemies, including deceased and depowered mutants like Pyro and the Blob, start coming out the woodwork.

From page one, Marvel Knights: X-Men feels like something quite different than any other modern X-Men book. Where the main X-Men titles have chosen to largely gloss over the downsides of being a mutant, Marvel Knights: X-Men embraces the angst-ridden, teenage mutant archetype that bred some of the franchise's most iconic character, like Rogue. The story embraces the street level feel of Paul Cornell and Alan Davis' current Wolverine series and mixes is with the modern, super-powered teen drama that Brian Wood and Becky Cloonan perfected in Demo.

Some might find this particular flavor of X-Men story off-putting. The current X-Men line, as high in quality as it is, has made a conscious decision to abandon the outcast metaphor in favor of the kind of high-adventure stories that Jason Aaron writes for Wolverine and the X-Men, where all of the students adjust to discovering their new mutations rather quickly and tend to find the constant attacks and hate for mutants from the rest of the world almost endearing. Brian Michael Bendis comes closer, adding a heavy does of melodrama to his stories, but that drama has largely been spent on love triangles in All New X-Men and political grandstanding in Uncanny X-Men.

Revel seems to be trying to tap into the heart of the X-Men in this story, reaching for the human drama of the mutant metaphor. He achieves this particularly through the character of Darla, a young mutant whose ability to manifest a person's memories led to tragedy for both of her parents. She is, understandably, having some trouble dealing with this new power and doesn't exactly greet the X-Men with open arms when they arrive. Matters are further complicated when she becomes their prime suspect in the investigation of the other mutant murders going on in the town. How the X-Men deal with Darla, an abandoned and troubled teen mutant who is also, potentially, a killer is an ethical sticking point for the three X-Men who are trying to unravel what is going on in this small town. Its a bold move for Revel as a creator, especially in a post-emo consumer culture that can still have a knee-jerk negative reaction to anything with a troubled teen in it.

Revel's art is a departure from what you'll find in most modern X-Men books as well, having more in common with Colleen Coover than Jim Lee. Revel uses a simple cartooning style, with refreshingly human looking characters that are designed more for emotion than action. It helps drive home the intimacy and the human element of the story. Peter's colors are similarly simple, but quite attractive, giving the art the kind of flat but lush look that Javier Rodriguez gives to Daredevil.

None of this is to say that Marvel Knights: X-Men has quite reached the heights of excellence that the books it is here being compared to have. The art is great, the story has a promising tone and setup, and the introduction of new characters with a bit of depth to them is certainly welcome, but a lot still rests on where Revel takes all of this potential in the series' remaining three issues.

As it stands now, Marvel Knights: X-Men is the most human X-Men story we've seen in a while. Young people struggling with powers and the X-Men being there to teach them how to live in a world that fears and hates them has always been the X-Men's true calling card. There's more to the story than just that though, including corruption, drugs, and a gun-trade that the X-Men aren't even aware of at this point. Brahm Revel has created an attractive, emotionally engaging, and mysterious X-Men story. Fans looking for something a little off the beaten path should definitely check this one out.