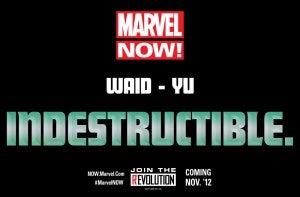 "Indestructible" might not be "incredible," but it's not a bad descriptor for The Hulk, one of the staples of Marvel's lineup and the third Avenger assumed to have his own Marvel NOW! teaser released in the last three days.

This time, it's writer Mark Waid and artist Leinil F. Yu who look to take over the Jade Giant, assuming that fans and the comics press are correct in assuming it's the case.

Earlier this week, it was widely reported that the pair would be taking on The Hulk as part of Marvel's broad relaunch initiative, so it doesn't seem like much of a stretch to think that this teaser is a confirmation of those murmurs.

The new series, whatever it is, will come in November, along with what we're assuming to be new monthly titles for Iron Man and Thor. Who wants to bet, with a newly-relaunched Hawkeye already on the docket, that the remaining teasers this week will be Captain America and Black Widow-themed? Seems a fair bet.