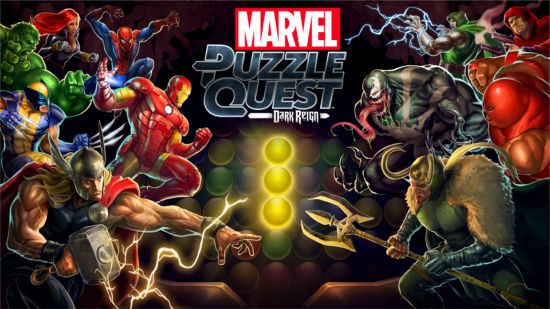 D3Publisher (D3P) and Marvel Entertainment have just announced that Marvel Puzzle Quest: Dark Reign is now available on the App Store for iPhone, iPad and iPod and Google Play for Android devices. This marks the first time that the Marvel Universe has teamed up with a puzzle role-playing game (RPG). The story will unfold over multiple episodes and will feature many fan-favorite heroes including Iron Man, Thor, Wolverine, Hawkeye, and many more, battling against a host of Super Villains including Venom, Doctor Doom, Magneto, and The Hood in a struggle to obtain and control the ever-mysterious ISO-8. Developed by Demiurge Studios, Marvel Puzzle Quest: Dark Reign features team-based gameplay for the first time ever in the Puzzle Quest franchise. Players will assemble a team of three characters with upgradable abilities, choosing from a roster of heroes and villains alike, all to combat a common enemy. With this team-based gameplay comes a new level of strategy and customization, allowing audiences to call upon specific heroes that are best suited for the job and to create an ultimate Marvel dream team as they travel across famous locations and visit familiar faces from the Marvel Universe. "We are pleased to share with fans the next video game in the Puzzle Quest series, and by teaming up with the creative minds at Marvel Entertainment, it creates the deepest puzzle adventure yet for the franchise," said Peter Andrew, vice president of product development, D3P. "Marvel Puzzle Quest: Dark Reign gives fans the perfect blend of role-playing and strategy elements that will continue to be the very best in the genre." "Marvel's Dark Reign storyline was one of the most impactful comic events in Marvel history, and now fans and gamers will have a new way to delve into the themes of power, deception, betrayal and retribution that are at the heart of this great story arc," said TQ Jefferson, Vice President of Marvel Games Production, Marvel Entertainment. "The new emphasis on deeper puzzle solving, strategy, and team dynamics in this game matches perfectly with this storyline, promising that Marvel Puzzle Quest: Dark Reign is a leap forward for the genre and a standout great experience from start to finish."