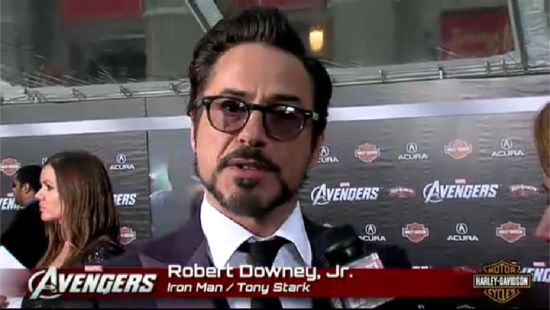 How do you know when a studio is feeling confident about a movie? They start to let people see it early, which is exactly what is happening with The Avengers. Studios usually have a fairly good idea of how a movie is going to do before it is ever released. Generally executives know when they are looking at a sure-fire hit or a guaranteed flop. It's the ones that fall in between that usually have executives guessing. When studios have the feeling that a movie won't receive positive buzz from critics and audiences, then they usually don't allow any early press or fan screenings. If a studio feels that critics and fans will like a movie, then the early screenings start happening to generate that free viral buzz. With The Avengers, Marvel Studios started the early screenings this week. The world premiere of The Avengers took place in Hollywood at the El Capitan Theater on Wednesday, April 11, 2012. Of course a world premiere involves mainly the stars of the movie, studio executives, and VIPs, so most attending a world premiere are going to have only good things to say. After all, they want to get invited back to the next world premiere event. What's a little more telling is that Marvel Studios is also doing advance screenings in ten cities around the United States this weekend. On Saturday, April 14, 2012, The Avengers will offer early fan screenings in Philadelphia, San Diego, Orlando, San Antonio, Phoenix, Los Angeles, New York City, Chicago, Miami, and Houston. The cities were selected based on the cities with the most Facebook fans of The Avengers, and fans were allowed to sign up for the screenings on a first come, first serve basis. With these screenings, it's likely that straight-forward feedback about the movie will start to hit Twitter. It's actually a little surprising that Marvel Studios is doing advance screenings this early. The Avengers already has extremely positive buzz due to a well-run marketing campaign and excellent trailers. Marvel Studios could easily play it safe and keep The Avengers under wraps and be virtually guaranteed a blockbuster opening weekend. By doing early screenings three weeks before the movie opens, Marvel Studios is actually taking a gigantic risk. If the movie doesn't live up to the hype and fan feedback is anything less than overwhelmingly positive, then it could slow the incredible buzz and awareness that The Avengers already has going. Which leads us to the conclusion that is the title of this article: Marvel Studios is feeling very confident about The Avengers. They have to already have a pretty good indication that the movie is going to wow fans or they wouldn't be holding advance screenings this early.

Marvel Studios Is Feeling Very Confident About The Avengers