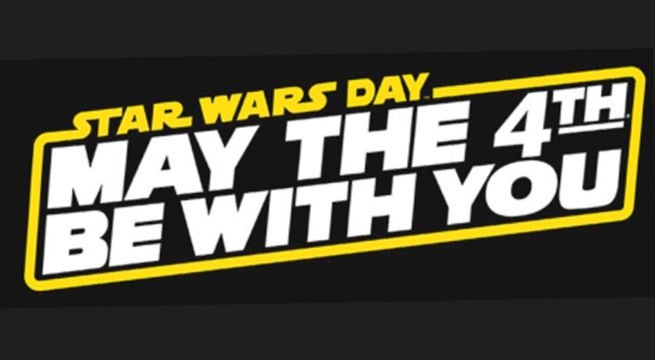 May the Fourth Be With You! While our regular column, MTFBWY is based on the original variation of that phrase, Star Wars fans have claimed that for a only slightly unofficial day celebrating their favorite fandom. You see, Star Wars fans also happen to be fans of puns, and “May the Force” sounds just enough like “May the Fourth” for us to all have a little fun with it.

While Star Wars Celebration has come and gone for the year, we still have a lot to be excited about in 2015 in the galaxy far, far away. The Force Awakens, Battlefront, Rebels Season 2, Aftermath, Shattered Empire, and so much more is on the way, and that’s just this calendar year, and doesn’t include the already-ongoing comic offerings from Marvel and regular new books from DK and Del Rey (haaaave you seen our reviews of their two newest selections?).

Want to celebrate with your fellow Star Wars fans today on May the Fourth? Start off by putting on your favorite t-shirt, socks, leggings, tie, pin, or any other identifying piece of Star Wars material you happen to enjoy. Got it? Great. Now, there are any number of things you can do on your own. Read your favorite Star Wars comic or book, whether it’s a Legend or part of the new all-canon. Try out the machete order of the films (that’s 4, 1,2,3,5,6 – with select Clone Wars episodes between 2 and 3 if you’re nasty)! Or, since Disney is now fully embracing the made-up holiday, there’s sponsored material for you to enjoy, as well!

Disney XD is celebrating May the 4th a few ways. First, you can stream the entire first season of Star Wars Rebels online for free, without any cable subscription, as we alerted you to last week. If you’d rather just watch TV (man, hooking the computer up is hard), the channel is kicking off bright and early at 6:30am EDT/PDT with the Phineas and Ferb Star Wars special. Starting at 9am, it’s Star Wars Rebels all day, straight through until 4:30, when the Phineas special will air again. After a fill-in from new hit series Penn Zero: Part Time Hero, The New Yoda Chronicles, based on the LEGO Star Wars series kicks off. Finally, if you just want a recap of season one, they have you covered with the Star Wars Rebels: The Ultimate Guide special at 8pm. Then you can put the kids to bed and start your marathon of the original trilogy. We know you’re going to do it, and it’s okay.

If you want to, you know, leave your house, Gamestop has some great deals for May the Fourth, with four (probably timed?) exclusive Funko POP! Vinyls, featuring Snow Drift Chewbacca, Figrin D’an, Hoth Han Solo, and R2-B1, plus a C-3PO Xbox One Controller, and two exclusive variant covers to Marvel’s Star Wars #4, a Rebel variant and an Empire variant to show your allegiance (or combine into one epic poster).

The Disney Store is also doing 30% off of Star Wars items both in-store and online. Amazon has a variety of sales across every level of Star Wars fandom from books to toys to video games. Love your Star Wars fan friends but too lazy to tell them in person? Send a free e-card via Hallmark’s customized Star Wars store! And there’s a Steam sale for classic games, and WeLoveFine.com has specials and even the M&M stores in New York, London, Orlando, and Vegas have new Star Wars products debuting for the unofficial holiday.

As for ComicBook.com, we’ll have a variety of one-on-one conversations with the cast of Star Wars Rebels running all day today, giving you some inside scoop on the excitement, interaction, and relationships between the characters on season 2 of the hit series.

So no matter if you’re at home, traveling abroad, want to go out, or veg on the couch, from ComicBook.com to you, May the Fourth Be With You, always (or… for one day).

How will YOU be celebrating May the Fourth, the unofficial Star Wars Day? Tell us your favorite way to celebrate in the comments!

May The 4th Is Star Wars Day