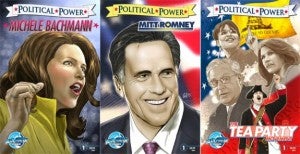 “We started our bio-comic line Female Force back in the 2008 election talking about Hillary Clinton and Sarah Palin,” said Darren G. Davis, who is president of Bluewater Productions. “It is fitting that we should be chronicling the movers and shakers of the 2012 election as well.”

“Our goal with these comics is not to pick a side, but to spark the interest of our readers and let them study both the lives of Rep. Bachmann and Gov. Romney closer,” said Davis. “And when you consider historical significance of what the Tea Party has brought to the table, you find it is not just a nod to the American Revolution, but it has forced a conversation in modern politics.”

"The Political Power series gives people who have only a nodding acquaintance with the political process and its personalities a more detailed look at the candidates, such as Mitt Romney and Michele Bachmann, and how new political movements, such as The Rise Of The Tea Party, can literally spring from the heartland of America and become a driving force in the political process," said writer Marc Shapiro. “These books are the perfect example of how a comic book can be entertaining and educational and are an example of how comic books have, in many cases, become the history books and instructional tools of the 21st Century."