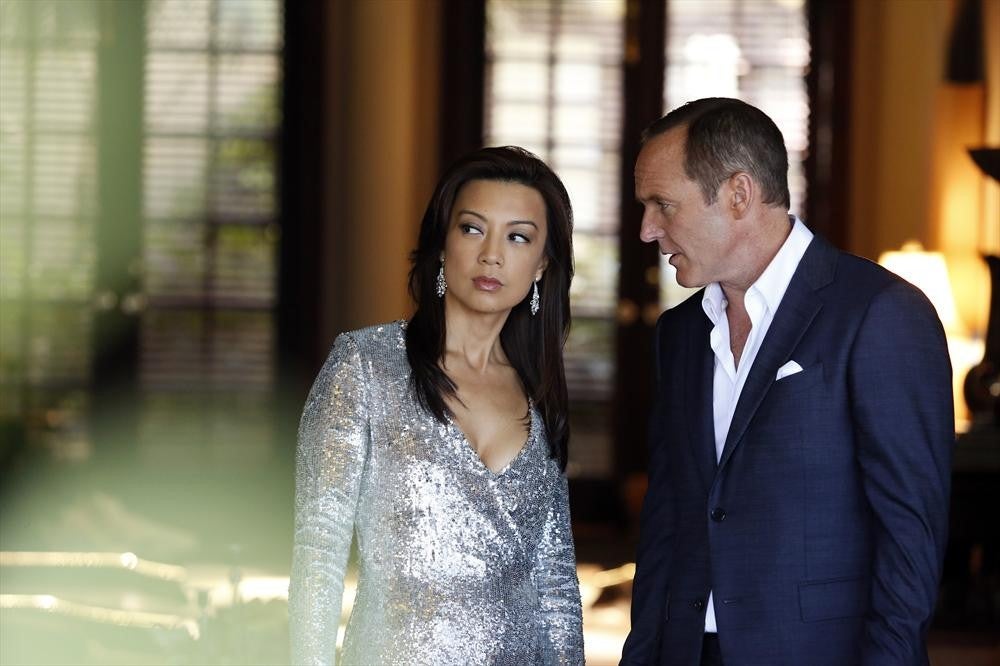 Prepare to witness an entirely new side of Agent Melinda May (Ming-Na Wen) in tonight's episode of Marvel's Agents of S.H.I.E.L.D. Ming-Na ditches the black jumpsuit for a evening gown. What she does with it will have fans of the show giddy with joy.

Episode four, titled "Face My Enemy" is in her words, the most exciting episode she's done yet. With Director Coulson (Clark Gregg) on her side, the two go undercover and get closer than ever.

Ming-Na Wen was able to take time out of her busy schedule to chat with ComicBook.com on the phone about the fun she had prepping for the episode, and reveals some interesting tidbits about the future of her character.

So let's talk about Agent's Of S.H.I.E.L.D. and tonight's episode, and especially that amazing dance scene!

You can't forget about the kick-ass Agent May fight scene though!

Oh, we won't, we'll get to that. So did you come to the show with those dancing skills or was that something you had to pick up on the fly when you first got the script?

I had to pick up Ballroom dance! You see, every dance has its own separate group of muscles that you have to perfect. I've done ballet, jazz, tap and let me tell you ballroom dancing is VERY different. You have to be in sync with your partner. And even though Clark (Gregg) and I have been working together for a year or so, we have never danced together, let alone ballroom dance. We spent many many hours finding that dynamic where we needed to take steps at the same time. There was a lot of counting, lets put it that way.

Is learning a new style of dance harder than learning a style of fighting or a fight sequence in general?

Yeah, because you know - when you're learning a new skill and you have two days to learn it, the pressure is on. I mean these are Agents of S.H.I.E.L.D., they're supposed to be the best at everything they do. There are a lot of insecurities that come with it, because you're saying to yourself "I'm going to be on national television and I need to be good at this."

I have to make some magic happen and convince the audience that we have this down. I was a bit nervous about it. Clark was wonderful and so diligent and focused and between the two of us I'm really happy with how it came out.

So we'll see you on the next season of Dancing With The Stars?

Oh no. I mean we were in the AUDIENCE yesterday, but no - won't happen.

Heading into these early days of Season Two, what is the biggest difference for you between this season and last season?

Well, I think the biggest difference is that in the first season there were a lot of scenes with the six of us. We were all learning who we all were and in season two, it comes from a place where there is a bit of a disconnect. We're incorporating a bunch of new characters, with new sets, and new dynamics of what S.H.I.E.L.D. is. With S.H.I.E.L.D. being no more, we're spies living as ghosts trying to rebuild the organization. In turn, this makes the season a bit darker and a little bit more serious.

Every one of us is in a different place than where we were last season and it's taking its toll on us as actors too. We're feeling it and it's what keeps us going every day we're on set.

Are you excited to get more action scenes this season?

OH MY GOD YES. I always am looking forward to them. I love working with our stunt team, learning the choreography and I even love how tired it makes me. Even counting all my bruises and injuries! They're like notches on my belt.

What's been your biggest injury?

Ummmm, oh gosh - I've had a few teeth knocked. Just a couple. It didn't hurt, it's just weird to be spitting out some teeth.

Do you think May misses the desk work? You know when we first met May, she was pushing papers along and out of the field for the foreseeable future. And now - you're losing teeth!

Not one bit. I don't think she would have so readily agreed to work with Coulson under the guise of having recruited her without knowing what Fury really wanted. I think in her heart of hearts she was just dying to get out of the situation she was in. Now she can do something entirely different with a stapler, and even a nail gun for that matter!

Speaking of weapons and gadgetry, we're seeing a ton more show up in the show! If you could take any one from the set, and use it in real life, which one would it be?

That Asgardian staff is pretty cool. I really liked those electromagnetic things that Black Widow used in Captain America: The Winter Soldier too. Those would be fun, they're like ninja stars with electrodes.

Shifting gears a little bit, I want talk a bit about you and your fans. You do a ton of engagement on social media, reaching out to fans, and answering all sorts of questions. What's the most rewarding aspect of that for you?

I am such a geek girl, that it's a pure merging of hearts. The excitement they go through in meeting me, just reminds me how lucky and how amazing that it is having this dream job. It's a great reminder of everything. It's like reliving everything I grew up loving, and sharing it with the fans. It makes me want to work harder for them. I love my fans. They make me so happy!

That's one of the great things about the show. That dynamic the entire cast has with the audience is so loving, and at times - familial. Now with the show having such great strong female protagonists, do you find that within your fan base that the age range is fairly large? Or is May big with a certain group and not the other?

One of the coolest things that I love about being in the Marvel Universe is that there are fans of all ages. There are kids who are dressing up as our heroes who maybe get it from their older siblings, or even their parents! For them to be so comfortable in our skins and be able to look up to any one of us is extremely humbling.

The age range is incredible. I think it's because it's fun and safe. It's about heroes conquering the day and overcoming evil. That's something that we all hope and live for in our daily lives. It's so fun and adorable to meet the little ones, and the grandmas and grandpas who grew up reading Marvel Comics when they were little.

Looking ahead in Season Two, what are you looking forward to the most in terms of taking May to her limits both physically and emotionally?

Well, one of the gifts I've been given already has happened. They've allowed May to go undercover and do something extraordinary…like smile.

She also gets to wear a really pretty dress tonight!

There is also a quote that my producers always say which is, "Less Ming, more May," and the reason is because we're SO different - May and I. Every so often I die to try and infuse a bit more me into May, but they're not letting me do that just yet. Maybe as an undercover assignment, it'll be okay.

Over time I'd love to spend more time exploring her emotional side. Find out why she is so bottled up, and why she always puts up a wall. I think a lot of it has to do with the relationship she has with her mother and her parents. It's these human things I'd love to explore and uncover bits and pieces of the May, the Calvary, we've come to know and love.

One final question before I let you go. Clark Gregg mentioned in another interview that if given the chance, he'd love to see Robert Downey Jr. show up on the show. If you had the chance to share a scene with anyone else in the Marvel Cinematic Universe, who would it be?

Well, Samuel L Jackson was a big one and I was super excited to do that. Ironically, I've done movies with both Robert Downey Jr. and Chris Evans separately - which is kind of crazy. But as their characters? I mean Robert Downey Jr. would be amazing to share a scene with. And of course, there's the answer that everyone knows because I say it all the time, but Chris Hemsworth.

But I mean, can you imagine Agent May and Tony Stark quipping back and forth, it would be amazing!