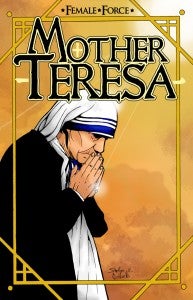 Mother Teresa will soon be getting the comic book treatment from Bluewater Productions and Emotional Content. Female Force: Mother Teresa: The Graphic Novel will tell the story of how Mother Teresa went from “a simple nun to a woman whose name grew synonymous with helping the poor.” The Mother Teresa graphic novel will be 163 pages written and drawn by Watami.

Bluewater Productions Publisher Darren G. Davis said, “Our goal is to show the little-known events and influences that resulted in Mother Teresa becoming the worldwide symbol of faith, hope and charity to millions across the world.”

“I wanted people to rediscover and value true heroism through my graphic novel series,” said Emotional Content owner Eiji Han Shimizu. “We are accustomed to thinking of comic book heroes as vigilantes battling crime and injustice through face-to-face-or mask-to-mask-combat with the enemy. However, I think superheroes in graphic novels don't have to be able to fly, cast lasers from their eyes or have six-pack abs. Without the help of these powers or appearances, there have been great role models in our history who have fought for others with their courage, self-sacrifice, compassion and determination. I believe that these are the true qualities of superheroes.”

“With that said, undoubtedly Mother Teresa is my superhero”, he continued. “When I visited the Home for the Dying Destitute in Kolkata for my documentary film project (www.TheHappyMovie.com) four years ago, I vividly felt her presence where hundreds of volunteers around the world serve with the poorest of the poor.”

“Mother Teresa does live in the compassionate minds and altruistic acts of millions of people”, Shimizu concluded. “This book is our humble contribution to further spread to the world the love that this great superhero has left us.”

Female Force: Mother Teresa: The Graphic Novel will be released in October with a cover price of $14.99.