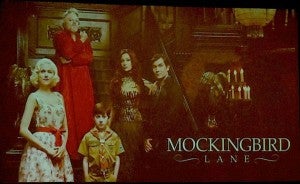 Earlier today, Deadline reported that Mockingbird Lane, the Munsters reboot from Pushing Daisies creator Bryan Fuller, was unlikely to make it past the network's scrutiny and that fans would never actually see the pilot, which stars Jerry O'Connell, Portia De Rossi and Eddie Izzard, among others. The site wrote:

"It looks like NBC's Mockingbird Lane pilot won't be going to series. There is no final decision, but I hear that the network brass are leaning toward passing on the project, a reboot of the classic 1960s sitcom The Munsters. The project from Bryan Fuller had been in the works at NBC for a couple of seasons, originally developed by the previous regime during the 2010-11 development cycle. Fuller's script was one of very few Bob Greenblatt kept in play when he took over the network in January 2011. It was redeveloped and, in November 2011, it was ordered to pilot around the same time another Fuller-written drama, Hannibal, landed a script-to-series deal at NBC."

Shortly thereafter, Fuller tweeted a denial: "NBC just informed me the Deadline article regarding #MockingbirdLane was Dead Wrong," the writer/producer told his followers. "Stay tuned for updates!" Fuller has a busy plate these days; in addition to Mockingbird Lane, he's developing Hannibal, one of two new TV series debuting this year based on characters from Thomas Harris's The Silence of the Lambs (the other revolves around Clarice Starling and is being developed at Lifetime). Additionally, MTV Geek reported yesterday that one of the stars of Pushing Daisies is hinting the property may be revived as a stage play.