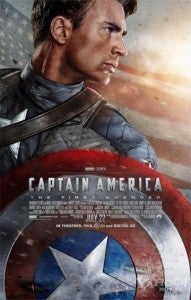 In addition to the Tommy Lee Jones humor, another thing that impresses us about the new trailer is Chris Evans looks like he is giving the best acting performance of his career. He's definitely matured as an actor, since he played Johnny Storm in the Fantastic Four movies. Captain America First Avenger really looks likes it's shaping up to be Marvel Studios' best movie since Iron Man.