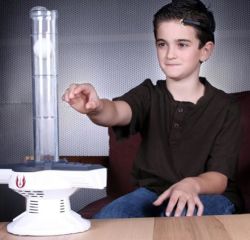 This year's Toy Fair in New York features a number of new Star Wars toys that combine the ways of the Force and real science. In a recent article from the Official Star Wars Blog, fans of Star Wars can catch a glimpse of a new line of educational toys from Uncle Milton, set to hit stores later this year. The line includes a couple of habitariums, a robotics kit that allows one to build a working replica of Darth Vader's hand, and a device to train young Padowans in the ways of the Force.

The Star Wars Force Trainer is a very unique piece of technology. With this device, the user puts on a small headpiece similar to the ones used by Jedi starfighter pilots. This headpiece measures brain wave activity, which in turns levitates a small probe situated within a cylinder. The harder the user thinks about trying to lift the device, the higher the probe will rise. This set will retail for around $129.

For parents who want to raise their children in the ways of the Force without spending a ton of credits, they may want to check out the Star Wars Darth Vader Electronic Arm. With this kit, one can built a real working replica of the Sith Lord's robotic hand. The electronic arm will retail for $44.99.

Kids will also be able to Star Wars-ize their next science fair projects thanks to Uncle Milton, the same company that brought us the original Ant Farm. In the Dagobah Frog Habitat, kids can learn the important parts frogs play in nature with a group of live tadpoles that come after a mail-in coupon is redeemed. The set is decorated to look like the swamp planet complete with a miniature frog hut and Yoda figurine. The line also offers a Naboo-themed set that includes a pouch of Triops Longicaudatus eggs that hatch and swim in water. Both sets will retail for $34.99. Lastly, kids can recreate the explosive activity of volcanic eruptions with the Star Wars Mustafar Volcano set, which retails for $24.99. The extremely well crafted replica of Sith history comes complete with fighting Darth Vader and Obi-Wan figures and instructions on how to recreate an eruption with household ingredients. If these kits were around when I was a kid, I'd have been a science fair Jedi, I mean, participant.