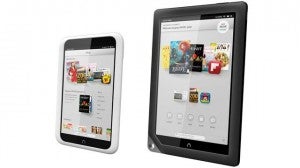 On Thursday at New York Comic Con, there weren't a great many panels and announcements made by Marvel and DC, opening up the floor somewhat to the rest of the comics industry to have a little room to breathe that they won't be likely to get on Friday and Saturday.

ComiXology hit Thursday hard, making not one but two pretty major announcements: First, the comics publisher has added a "Pre-Order" feature to their site.

"Pre-ordering kicked off earlier this week with Marvel's launch of Marvel NOW! and the release of Uncanny Avengers #1, to give Marvel fans the ability to make sure they didn't miss the first issue," said ComiXology. "Since Marvel's Uncanny Avengers #1 debut, comiXology has rolled out the ability to pre-order to a wider slate of titles and is eyeing offering all new comic books and graphic novels for pre-order in the future."

A silent roll-out earlier in the week likely explains why some readers reported the book going on sale early, and then later suggested that their purchase had been converted to a pre-order.

The digital publishing leader also announced the roll-out of ComiXology Submit, a program by which small publishers and self-publishers can submit their materials to ComiXology and reap the benefits of ComiXology's wide distribution and accessibility on most portable e-reader devices.

“When we started ComiXology it was with a handful of comics from deals done directly with creators and very small publishers,” said co-founder and CEO David Steinberger. “We are happy today, with the announcement of ComiXology Submit, that we now have a turnkey system to service this incredibly vital part of the marketplace. ComiXology Submit, helps keep the promise to our customers of having the best and most diverse comic books and graphic novels available worldwide.”

Currently, ComiXology Submit is still in limited beta, but potential new users can submit their contact information to be informed when the program goes wider.

Barnes & Noble is at New York Comic-Con, too, with their new Nook HD devices the focus of their conversations. While those units aren't at the Javits Center yet, word is they'll debut at NYCC by the time the weekend is through.

Meanwhile, a 200-page ebook that collects the first issue from each of the Before Watchmen titles will be included for free with any Nook Tablet bought at the show. The collection will go on sale on all Nooks next week.