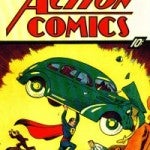 Well, crap. Just when we thought we'd seen the last of Nic Cage in a comic book movie.  Lionsgate apparently is making a film based on the heist of Cage's "Action Comics" #1.

For those of you that aren't familiar, Cage owned a bunch of high valued comics, including "Action Comics" #1, which features the debut of Superman.  In 2000, those comics were stolen from Cage's home, only to be recovered in 2011.  Cage then went on to sell the "Action Comics" #1 for a record $2.1 million this past November.

Now, according to THR, "Reno 911!" creators Robert Ben Garant and Thomas Lennon are developing the story for Lionsgate.  Why, I don't have any clue.  Not really sure how the story would play.  Drama? Comedy?  And if you put Cage in it, it's guaranteed to suck ($1 to the "Ghost Rider" films).

Luckily for comic book fans, it looks like Cage is not the only frontrunner to star in the story.  Jason Statham's name is being kicked around as well.