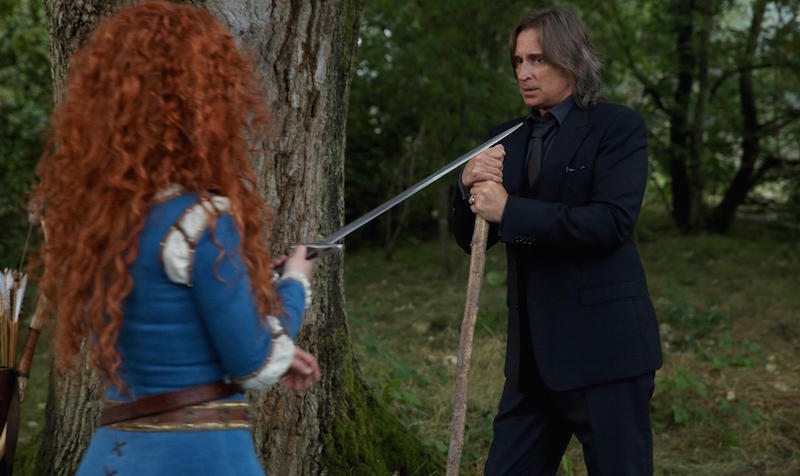 Episode five of this season, entitled “Dreamcatcher,” opens in Camelot, “many years ago,” where we see a young Merlin summon the Dark One. He raises the dagger to kill him, but instead collapses on the ground and drops the dagger, unable to commit the deed. The Dark One picks it up and captures Merlin in a tree, utilizing one “tear of lost love.”

In the “present day” of Camelot, Mary Margaret (Ginnifer Goodwin) and David (Josh Dallas), who are under Arthur’s spell, want to give him the dagger, but Emma (Jennifer Morrison) uses dark magic to freeze them just in time. She explains everything to Regina (Lana Parrilla), and the two of them devise a new plan: If a tear of lost love bound Merlin into a tree, perhaps another will free him.

Elsewhere, Henry (Jared Gilmore) grows closer to Violet, and the two of them bond over their parents who have died. Before long, Violet briefly leaves the stable, and Henry manages to make a ruckus and draw her father to his location. The man, Sir Morgan, berates Henry for being merely a writer and not a squire for a knight.

While in present day Storybrooke, Emma demands that Rumple (Robert Carlyle) removes Excalibur from the stone, but he insists that he isn’t brave enough. Emma forces Merida to “teach him” to brave, since she controls Merida’s heart. Outside, Merida does her best to teach the craven Rumple to fight, but he is weak and insistent on his cowardice.

Nearby, Henry and the others decide to throw a dance to raise morale. Violet is too sad to attend the party, because her horse has gone missing. Henry meets up with Emma and asks her to prove that she is still his mother by helping his friend “find her happy ending,” and she accepts the challenge. While they are gone – Regina, Hook (Colin O’Donoghue), Belle (Emilie de Ravin), and the others break into Emma’s home.

In the continued flashback in Camelot, Henry is trying to learn sword fighting after his verbal beating from Sir Morgan, when Emma and Regina find him. They remind him how important it is not to change who you are to impress someone, and they suggest that he embrace his role as a “mysterious stranger in an exotic land.” That night, Henry plans an elaborate date for him and Violet at Granny’s, showing off all their modern amenities, but unfortunately, Violet just wants to be friends.

Next, Emma and Regina figure that the best way to obtain a tear of lost love is to take one from Regina herself. Regina looks into the dreamcatcher and relives the moment that her mother killed Daniel, quickly prompting tears. That night, Emma constructs the potion to free Merlin, but it doesn’t work. Apparently Regina’s tear wasn’t strong enough, because she has moved on from her lost love. Henry meets up with them after his failed date, devastated. They catch one of his tears to try instead of Regina’s. 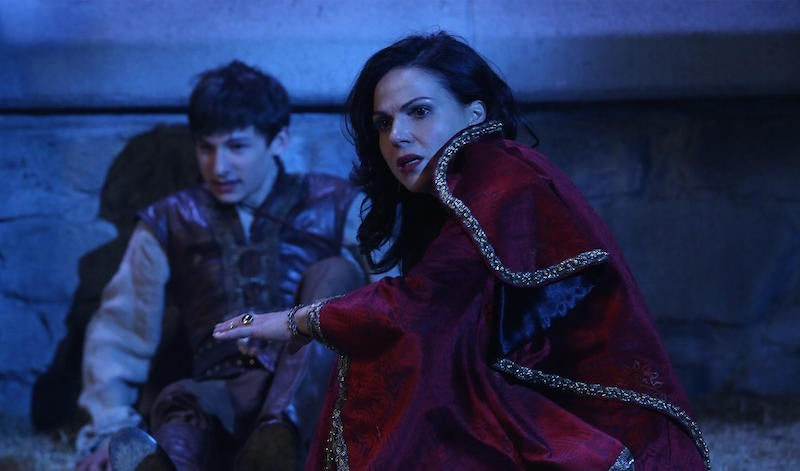 Before they can create the new potion, Arthur (Liam Garrigan) approaches, angry about their deception. Regina does her best to fight off Arthur, while Emma uses Henry’s tear and dark magic to create the potion that should free Merlin. It is successful, and Merlin emerges. “I have been waiting for you, Emma,” he says, before calling Arthur a disappointment.

In the present again, Henry and Emma find Violet’s horse, and Henry manages to gain the horse’s trust and return him home. While back at Emma’s house, the other have discovered Excalibur and its connection the dagger. On their way back out of the house, they find Emma’s dreamcatcher as well. Regina suspects that it was used to steal their memories.

That night, Hook and the others meet with Arthur and Guinevere to share what they have learned. He explains that the restored blade – a combination of the dagger and Excalibur – would have the ability to either snuff out all dark magic or all light magic, forever. Nearby, Henry arrives with Violet’s horse, returning him to her and earning the respect of Sir Morgan. She gives Henry a kiss on the cheek.

Out in the woods, Merida is still trying to train Rumple. She begins to taunt him about his past and his personal relationships, bringing out his rage and true bravery. She wants to train him to be strong enough to defeat Emma.

Later that night, Regina and Robin (Sean Maguire) look into Emma’s dreamcatcher and find the memories not of Emma, nor of Henry, but of Violet. In them, we see Emma approach Violet before her date with Henry. She took out Violet’s heart and explained that she needed a tear of love lost, demanding that she break Henry’s heart. Regina and Robin do not realize that Henry has been behind them, watching the memory.

Then, Emma meets with Regina at her home, and Regina reveals what she’s discovered in the dreamcatcher about Henry and Violet. It turns out that Emma actually released the horse herself, so that she could use a rescue mission to make it up to Henry. In their argument, Emma slips up and reveals that they saved Merlin in Camelot.

In Camelot once again, Merlin uses his magic to free Mary Margaret and David from Arthur’s magical sand. Merlin agrees to save Emma from the darkness, but only if her heart is truly ready to be free.

Once Upon A Time Season 5 Episode 5 With Spoilers: Dreamcatcher