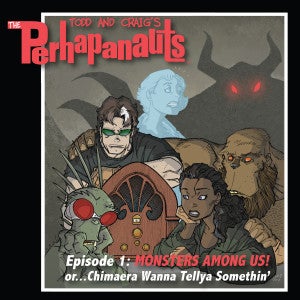 AudioComics, who have produced audio dramas based on comics projects like Starstruck and Molly Danger in the past, announced this week that tomorrow will see the release of The Perhapanauts: Monsters Among Us, or, Chimaera Wanna Tellya Somethin', the first episode in a new series of audio dramas featuring the creations of writer Todd Dezago and Craig Rousseau.

The presentation will be available for digital download from iTunes, Amazon MP3, Amazon MP3 UK, and AudioComics Digital Direct.

In Chimaera…, the ‘Haps' chief scientist Big the Sasquatch (voice of Christopher Price) relates the details of a recent mission to a skeptical new recruit, one where BEDLAM’s Blue Team battled the mythical (and monstrous) Chimaera. Only the story doesn’t exactly end in the field…

Written by Dezago and Elaine Lee, and directed by William Dufris, Chimaera… features the voices of Price, Dufris, Audie Award-winning narrator Robin Miles, Paul Drinan, Jaime Blank, Brent Aksari, Joshua Hughes, Lance Roger Axt, and Dezago as fan-favorite character Choopie the chupacabra (if you knew Dezago, you would know how perfectly cast this is). The cover art seen above is by Craig Rousseau.