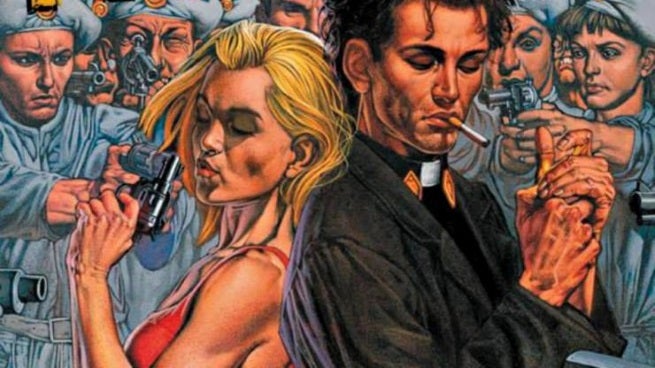 The Sony Pictures Television and AMC Studios co-production was developed for TV by Breaking Bad's Sam Catlin with Seth Rogen and Evan Goldberg. Rogen and Goldberg will produce through their Point Grey banner, along with Neal Moritz’s Original Film.

The pilot was written by Sam Catlin. Rogen and Goldberg are attached to direct.

“Every once in a while you find a project where all the elements line up beautifully. With Preacher, it starts with a bold, compelling, and thought-provoking comic book series from Garth Ennis and Steve Dillon and a whole lot of fans who already know Jesse Custer, Cassidy, and Tulip,” said Joel Stillerman, AMC’s executive vice president of original programming, production and digital content. “Add to that the passionate and talented Seth Rogen, Evan Goldberg, and Sam Catlin, an incredible producing team in Neal Moritz, the Original Film team and our good friends at Sony Pictures Television, and we have everything we need to be VERY excited to move forward on Preacher.”

“Preacher has been our favorite comic since it first came out,” Rogen and Goldberg said in a joint statement. “Garth Ennis is one of our idols and it’s an incredible honor to be working on this. We promise we won’t make too many dick jokes and ruin it.”

“Steve Dillon and I are extremely pleased to know AMC has taken Preacher to pilot," said Ennis. "We have had an ongoing voice in the efforts of the writers whom Sony TV and Original Film entrusted with this project, Seth Rogen, Evan Goldberg, and Sam Catlin, and have been most gratified that they continue to include us, and that they have tackled the project with the type of unwavering commitment and courage needed to present the material as Steve and I intended.  This has been a long time coming, but that it continues apace, and with the chance to be delivered episodically, gives Preacher an opportunity to be seen in its best possible medium, not previously possible.  And many thanks indeed to Ken Levin and Neal Moritz for their never flagging commitment to ‘Preacher,’ and for never giving up well past the point when I myself grew skeptical -- we have principally gotten to where we are today because of Neal and Ken.”

Preacher centers on Jesse Custer, a small-town Texas who is suffering through a crisis of faith when he merges with a creature that has escaped from Heaven and develops the ability to make anyone do anything he says. Along with his ex-girlfriend, Tulip, and an Irish vampire named Cassidy, the three embark on a journey to literally find God and make him return from his vacation -- or pay for his abandonment of humanity. They're not picky.

The pilot will be produced in the summer of 2015 for series consideration in 2016.