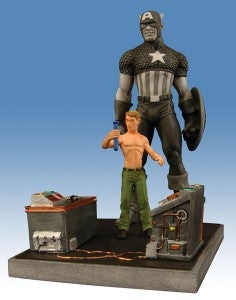 The U.S. Military is developing technology aimed at creating American soldiers with "mutant powers," including enhanced strength and cognitive function, according to a new story in Wired.

And they're worried about the long-term ramifications for those involved, and the ethics for the U.S. military.

“Somewhere in between robotics and biomedical research, we might arrive at the perfect future warfighter: one that is part machine and part human, striking a formidable balance between technology and our frailties,” says a new report out today, which looks at cybernetic enhancements, drug regimens and other ways the military is trying to increase performance among soldiers on the ground to post-human levels.

“With military enhancements and other technologies, the genie’s already out of the bottle: the benefits are too irresistible, and the military-industrial complex still has too much momentum,” California Polytechnic State University researcher Patrick Lin told Wired. “The best we can do now is to help develop policies in advance to prepare for these new technologies, not post hoc or after the fact (as we’re seeing with drones and cyberweapons).”

Lin is one of a trio of researchers who have released a paper on the issue, warning that "the risk, ethics and policy issues arising out of these so-called “military human enhancements” — including drugs, special nutrition, electroshock, gene therapy and robotic implants and prostheses — are poorly understood." You can download the Greenwall Foundation report, out today, as a PDF.

One of the issues raised is that of the unintended consequences of dosing soldiers: a group of Canadian soldiers was inadvertently bombed, and four killed, by a U.S. pilot who thought their training exercise on the ground below him was an attack by insurgents in Afghanistan. The pilot blamed his reaction on the fact that he'd been taking Dexedrine, a stimulant regularly given to pilots on long runs to keep them awake and alert.

And yes, they address the obvious: “In comic books and science fiction, we can suspend disbelief about the details associated with fantastical technologies and abilities, as represented by human enhancements,” they warn. “But in the real world — as life imitates art, and ‘mutant powers’ really are changing the world — the details matter and will require real investigations.”

The Baby Yoda Shoulder Sitter Plush is Back

Netflix Releases Full Trailer for The Trial of the Chicago 7