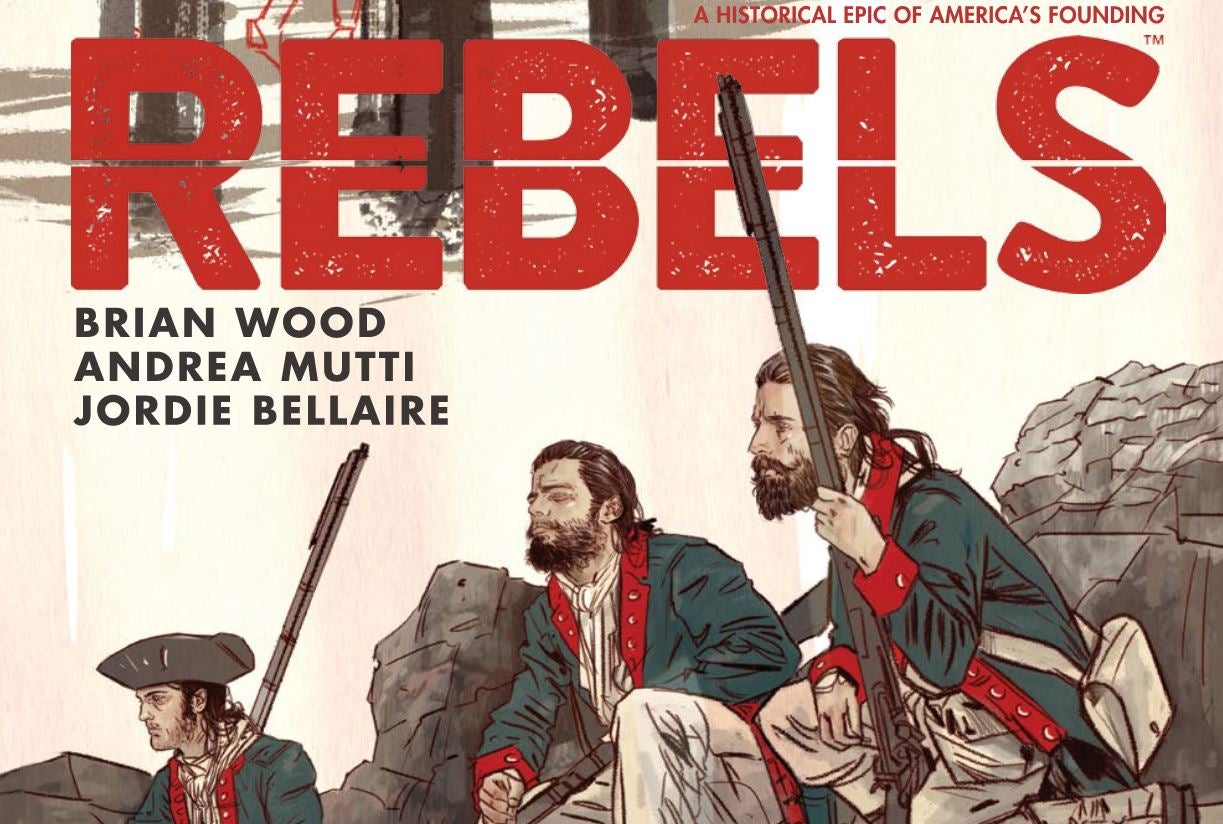 Two of the most significant themes in Brian Wood's comics work are American politics and historical settings. In DMZ he explored what it means to be American, the promises and freedoms that lay at the core of that concept. In Northlanders, he applied research to a viking narrative, evoking a sense of realism to the drama. Those two themes combine to form the core of his and Andrea Mutti's new series Rebels coming from Dark Horse Comics on April 8th.

Rebels #1 focuses on Seth, a farmer turned militia member from the hilly, forested region of New Hampshire known as The Grants. The story opens with him as a boy being trained by his father to use a rifle before shifting to the year 1775 as tensions between the American colonies and Britain continue to increase. It is a tale firmly embedded within the history of the American revolution, but it is not a retelling of this period. Rebels #1 is Seth's story, one that reflects the war for independence.

Mutti establishes the setting of this story with the use of research and carefully applied details. The clothing used throughout Rebels #1 speaks to a serious concern for authenticism. It is not difficult to caricature appearances from this period of American history with red coats and tricorn hats, but Mutti digs deep and works to design the dress of characters in both foreground and background. Looking at a gathering of New Hampshire colonists in a courthouse, the diversity of their appearance is striking. Some American men wear tricorn hats and British soldiers are clad in red coats, but they are worn realistically with weathering and tailoring appropriate for the time and conditions.

It is not only the diversity, but the appropriate nature of what is being worn as well. Seth and his friend Ezekiel are travelers and woodsmen, and their clothing and accessories bespeak their role in the colony. It also varies from the farmers and townsmen who fill the court house. Looking at a complete portrait of any character portrays information about who they are and what they do. It all speaks to careful design work by Mutti. In doing this, she has created an immersive setting. Rebels #1 reads like an honest depiction of life in New Hampshire in 1775.

Mutti's work is not confined to characters and dress alone. She moves the story through a wide variety of settings, depicting well realized colonial farmlands and townships. His sequences set in The Grants, at both the beginning and end of the issue, looks appropriately verdant and untamed. It is an area filled with opportunity and danger, one that speaks to the American mythos being explored in Rebels. Even his depiction of flintlock rifles and the appearance and result of their firing rings true. Gouts of smoke fill panels with a gruesome vague haze when the weapons discharge in a volley. Rebels #1 is far from a documentary, but Mutti's attention to detail and tone ensure that it reads as a narrative concerned with the history it is depicting.

Jordie Bellaire's wonderful color work enhances every panel. She has selected a palette filled with earthen tones as true to the period as anything Mutti draws. Even red coats on British soldiers, the brightest colors to appear in the comic, do not pop or overwhelm the panels. Her coloring in these sequences feels like something pulled from an earlier time. That effect extends even to Jared K. Fletcher's lettering. Dialogue is written in font that feels rough hewn in all caps. It is loud and human in nature. The captions that contain Seth's narration are entirely different though. Golden words on a black background appear with careful precision, like from the hand of a man trained to write with a fountain pen. It is not calligraphic in nature, but there is a flawed elegance that comes close.

Seth's narration plays a significant role within his story beyond that of exposition and well done lettering. Wood is interested in how our words and voices are used to reflect larger ideas and beliefs. Seth is shown to be a quiet man from the start of the issue, a familial trait passed from his father. Yet, just like his father, when he uses his voice it is an incredibly powerful tool. Both men speak eloquently and cut directly to the point. It is a notable distinction when his father first speaks because the same man who consistently uses three or four syllable words was incapable of stringing more than three together before. That surprise is not as obvious with Seth. His narration and conversation with friends never make him out to be the quiet man that Ezekiel claims him to be.

Wood's thematic point still stands though. When Seth and his father speak, it is in regards to the ideals of freedom and representation which they so desperately desire. Their voice is not seen to be a natural talent, but something summoned from a primal need for which they will fight. Although they are not the wealthy politicians and lawyers who will help to draft the Declaration of Independence or Constitution, Wood sees a connection between both of these very different roles.

This speaks to a certain romanticization that Wood applies to the American Revolution in Rebels #1. Seth's words and ideas are all noble. Even when he fires on unaware British soldiers as a child, well before the Revolution, there is no questioning the morality of this decision. The soldiers that appear later in the story are a bland and obviously villainous group. Wood is interested in the myth of the American Revolution and the ideals that it has come to symbolize within the American consciousness. There is ugliness and detail to be found in the story, but it still being introduced as a tale of noble freedom fighters banding together to fight tyranny.

There is nothing wrong with that sort of exploration of the revolution. It is a focus far better suited to the comics medium than a nuanced exploration of the entire historical epic. This only becomes problematic when the narration veers towards being heavy-handed. That is not a significant problem in Rebels #1, but Seth's verbose narration occasionally transforms subtext into simple text.

For most of Rebels #1 though, Seth's journey and his speech are spinning together an idea of what it meant to be an ordinary man at this pivotal point in American history. Mutti, Bellaire, and Fletcher have provided a rich appearance, telling and setting the story with careful eyes and minds. Wood is bringing together themes and concepts that he has engaged with for years. Rebels #1 is the starting point for a story that could bloom into a poignant statement on America's origins and the country's current state.

Rebels #1 is Drama with a Great Sense of History