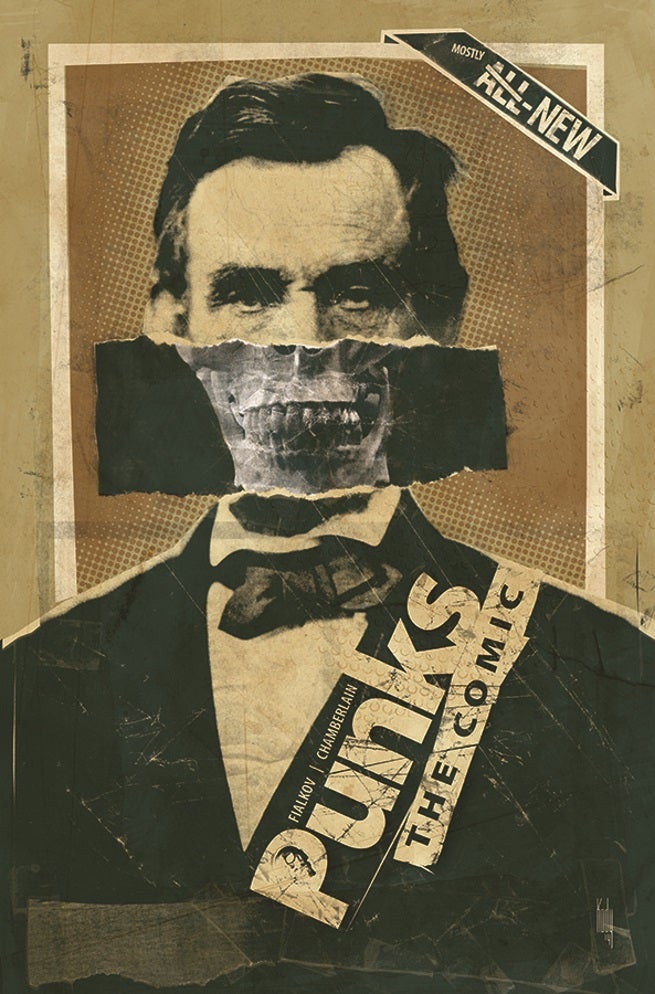 I’ve rarely found a comic so dedicated to a single aesthetic as Punks: The Comic. That aesthetic just happens to be flipping the bird to its audience, its medium, itself, and anything else it can find. It’s a punk attitude that simply doesn’t care about much of anything.

I will admit that Punks will not immediately appeal to everyone. Readers of superhero fare and those who have never picked up a small press comic before will probably be put off by its flippant tone and lack of concern for standard plotting and characterization. If you asked Punks what it is about, it would probably respond by either kicking you in the crotch or telling you it doesn’t care.

But to me, that’s sort of perfect.

It’s deeply committed to conveying an attitude that carefully balances nihilism and comedy. The nihilistic attitude comes from its rejection of popular mainstream comics. Complex plotting, beautifully rendered art, three-dimensional characters, and high concepts have all become staples of Image Comics success and have been found more and more often at rival publishers. None of those things are present in this comic. Instead, it embraces a lack of complexity or narrative cohesion that is almost impossible to find in mainstream publications (with the notable exception of God Hates Astronauts).

Joshua Hale Fialkov has assembled four semblances of characters, a fist, a dog, a skull, and Abraham Lincoln to beat, harangue, and depress one another and anyone that crosses their paths. The ludicrous nature of these four is acknowledged openly and often within the comic. Abe constantly refers to himself as being a 200 year old, dead President with a head wound and the fist is required to use signs in order to communicate (due to having no mouth). They act without concern for consequences or interpretation, rejecting both the expectations of modern society and readers. Non sequiturs appear and add to the pandemonium based upon Fialkov and artist Kody Chamberlain’s whims. Lawn gnomes and lingerie-laden velociraptors appear for no better reason than the amusing distraction they provide.

A puzzle page found midway through the issue further mocks the comic itself and the reader. All five puzzles are impossible to solve and include loads of inane humor, like a word search composed only of the word “poop” (and sometimes “pop”). The answer key directly addresses the reader with verbal abuse. At the end of the comic, Abraham Lincoln introduces some back matter which has been split between issues one and two for the sake of “crass consumerism”. It’s the kind of bonus material used to maintain readership on more commercial fare, but the strategy is explained to the reader in the harshest of terms here. The issue mocks trends in the comics industry while opening acknowledging that it is engaging in the very same behavior.

It’s a testament to both Fialkov and Chamberlain’s skills that the comic flows as well as it does. Despite its tendencies to skew towards the absurd, there is a current to all of the events within Punks. It moves seamlessly between brawls with gnomes to surprise marriages. The odd connection of events may be compared to programs like Family Guy, but that undersells the effectiveness and creativity present. Punks doesn’t interject non sequiturs or rely on pop culture in order to function. It is a continuous narrative that goes wherever it wants. Readers will have to accept the strange nature of the comic for what it is, but they will never have to question how they reached whatever they are reading.

This odd flow and narrative logic is what creates Punks consistent and often biting sense of humor. Even in a silly sequence where Dog’s three roommates attempt to hit on his new girlfriend, there is a sense of poignancy. The roommates state the meaning of what they would say to the woman, rather than the thing itself. Abe says, “Old-timey folksy comment that would be offensive if I wasn’t 200 years old” while Fist holds up a sign saying “Ironic, but secretly anti-feminist outburst!” It’s funny because it undercuts the trope of men using lame come on’s to hit on a woman. It also calls out the sexism found in scenes like this. There’s nothing feminist about laughing at misogynistic characters. It turns the misogyny and sexism present into an amusing diversion into something harmful. Beneath much of the humor in Punks lies this sort of scathing commentary.

Chamberlain composes the entire comic in a fumetti style, splicing photographic images together with and applying an aged appearance to create each panel. Abraham Lincoln is created using actual photographs of Lincoln along with clippings of another man’s torso and legs. The number five from a five dollar bill is always placed on his chest. Each panel constructs an aesthetic of sloppiness, but are carefully composed in actuality. The same photograph is rarely reused and many clippings provide the perfect comedic effect. All of Punks #1 is easily read and panel compositions naturally guide the readers eye. There is a lot of effort applied to creating this comic that appears like it doesn’t care to put in any effort at all.

The clear sense of storytelling, absurdist humor and focused commentary all underlie the fact that Punks is a very smart comic. It calls out trends in modern, mainstream comics, pointing to problems with gender representation and the commoditization of intellectual property with a big, stupid grin. The points are there for anyone willing to take the time to consider what they are reading, but are not belabored. Part of its nonchalant appeal comes across in that even when Fialkov and Chamberlain have a point to make, they are unwilling to take themselves seriously. In mocking the industry in which this comic exists, it also posits an alternative. Punks, more than other comic made available in the Diamond catalog, feels like an indy book. It has an aesthetic and style that is truly unlike anything on most shop shelfs. The style of the comic presents an alternative to its readers, an invitation to read small press books for something new. There’s an anger that lies beneath its apathetic attitude. Punks manages to satirize modern comics and revel in its own unique attitude without appearing to obviously put any effort into the task.

Punks: The Comic relentlessly mocks itself and everything around it. It’s nihilistic, but in a way that bears more resemblance to the punks in The Big Lebowski than A Clockwork Orange. It puts on a face of apathy in order to mask the desires and concerns of its creators. Fialkov and Chamberlain have created a comic that doesn’t seem care, even when it has something worthwhile to impart.

Punks is a comic worth reading, even if it may disagree.

ADVANCE REVIEW: Punks #1 - "The Aesthetic of the Middle Finger"