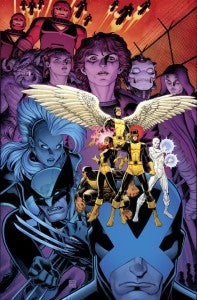 September 2013 marks the 50th anniversary of Marvel's merry mutants and they're celebrating the occasion with X-Men: Battle of the Atom, the crossover event the franchise has been building to since last year's Marvel NOW! relaunch. The first two chapters of the event were released last week in X-Men: Battle of the Atom #1 and All New X-Men #16, both written by Brian Michael Bendis. The focus is immediately placed on the original five X-Men, who were plucked from the past and brought into the present day by Beast in a failed attempt to bring Cyclops to his senses following the events of Avengers vs. X-Men. After seeing how their futures turn out – especially for the presently deceased Jean Grey – the young X-Men decide to stay in the present day until they find a way to fix things. This creates a very dangerous situation with concerns to the stability of the timeline, as demonstrated in Chapter 1, when Cyclops from the past dies (before being saved by Triage) and the entire universe trembles as present day Cyclops is briefly blinked out of existence. The present day X-Men finally decide that its time for the "first class" to go home, but the young X-Men resist until a team of X-Men from the future arrive on the scene to make sure the original five return to their own time in order to avoid the apocalyptic events of their future. It all sounds a bit complicated, but Bendis makes it all feel very simple by focusing on the human element rather than the pseudoscience. The tone he sets for Battle of the Atom is entirely different than that of past X-Men events, which are often guilty of losing sight of their characters amidst fast-paced, action driven plots. Bendis takes his time, using the first chapter of the series mostly as prologue in order to layout the large scale threat to the timeline. With that out of the way, Chapter 2 focuses mostly only the clashing motivations of the characters involved. Jean Grey sees being sent back to the past (and almost certainly being mind-wiped by Professor X when they arrive) as a death sentence and so stubbornly attempts to stay in the present day regardless of the danger it poses. Young Cyclops is loyal to her, unaware that she sees him and their future relationship as part of the predestination that she is trying to escape. The other X-Men are concerned with the greater good and can't reconcile the altruistic, adult Jean Grey that they remember with the brash and willful young girl they brought from the past. 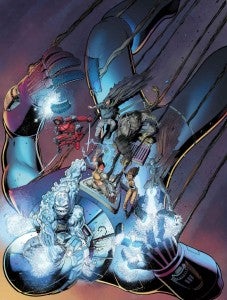 Jean is truly the centerpiece of the story (a point underscored by a reveal that occurs towards the end of Chapter 2), so Bendis' skillful handling of her character is key to the success of the story. Without the right amount of pathos, she would almost seem a villain, but she's written, more sympathetically, as a teenage girl who is being forced to stare her own death in the face. Really, what other choice does she have but to run from it? Frank Cho does a stellar job penciling the first chapter, providing the "pinup girl" female charterers that he is known for without relying on "cheesecake" art to sell his pages. The layouts are clean, simple and attractive and he does a perfect homage to the end of "The Dark Phoenix Saga" in the panel where Cyclops is blasted by a sentinel. But its Stuart Immonen's art that really steals the show in Chapter 2, which should come as no surprise to anyone who has been following All New X-Men. He effectively uses two-page layouts to allow Bendis to get in all the dialogue he needs while keeping the story's pacing steady. He may be the best two-page layout artist working today, creating beautiful spreads that feel lush and full (thanks in part to excellent inks and colors from Marte Garcia and Wade Von Grawbadger, respectively) without ever sacrificing panel flow or confusing the reader's eye. His individual panels and character expressions are equally excellent, putting a wealth of emotion on display in just a few frames. The two page sequence showing Cyclops and Jean making their escape conveys all of Jean's frustration with the situation, all of Cyclops' unconditional love for Jean, and all of Jean's wariness of that love in just a few simple panels. Immonen owns this book and is building himself a place in the upper echelon of great X-Men artist. Battle of the Atom is off to a fantastic start and will continue over the next two months in the pages of All New X-Men, X-Men, Uncanny X-Men, and Wolverine and the X-Men. Get on board now for what looks to be  a comic book crossover event done right.

Review: The X-Men Celebrate Their 50th In Style With "Battle of the Atom"