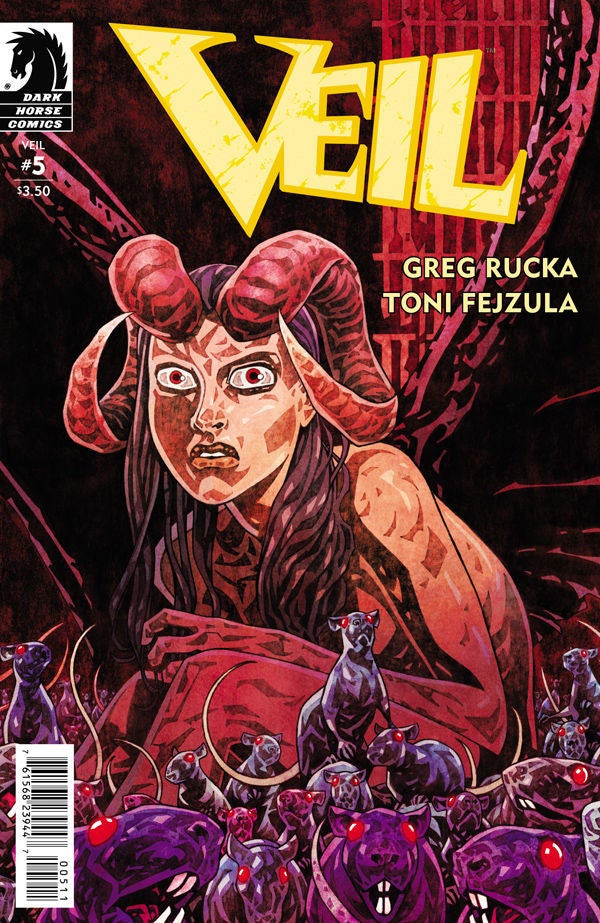 Veil has been interested in issues of sexuality, objectification, and control from its start. Greg Rucka and Toni Fejzula have always been aware of what this comic is about. It began with a beautiful woman wondering naked without a single memory and was driven by the impulse of men to control her. This is the issue that transforms every remaining bit of subtext in Veil directly into text and it wraps up this mini-series perfectly.

For a series that often presents the human body in a vulnerable state while addressing ideas of sex and control, the presentation was always going to be key to its success or failure. In Veil #5, it continues to be abundantly clear that Fejzula has been a perfect fit for the series. His depictions of Veil have always shown her to be beautiful and desirable, key components of the story, but have never objectified her. Veil has always been shown as a human being (or at least a being that appears mostly human) and her sex has never been emphasized over her humanity. Fejzula's compositions of her naked body in this issue present her as a complete person, not a collection of parts. That balance between sexualization and objectification is an incredibly difficult line to walk and one Fejzula navigates with seeming ease.

Fejzula's work presenting the more monstrous aspects of the story is every bit as beautiful, although considerably more terrifying. Decay is rampant in this comic, as half dead rats and dismembered corpses fill the panels. Under his pen, these aspects appear appropriately broken and disconcerting. They are a shattered stained glass window doused in blood.

Through Fejzula's art, the themes of Rucka's script are allowed to come through clearly. Veil has explored the role of women in a predominantly male society. Veil is the sole female presence of any significance forced to endure various attempts at control and restriction throughout the series. In Veil #5, Rucka places her in direct opposition with the man who began the entire ordeal, the one who seeks to literally control her body and soul. He acts and looks like someone pulled from a Gamergate video on YouTube, displaying the most self-assured and idiotic combination of physical and verbal traits. Rucka also poses an alternative to this behavior in Dante. The villain refers to Dante as a "white knight", a phrase used by Internet misogynists to demean men who defend women.

There's an important distinction that Rucka creates in Dante's role though. Dante is capable of doing the right thing and helping Veil, but he is not the hero of the story. Veil is still the character who overcomes the villain. She works to save Dante, just as much as he does the same for her. She is ultimately the last person standing. Veil is not defined by Dante's heroism, but by her own actions. That's incredibly important. Although Dante is a hero within it, the narrative is still driven by a woman.

There are plans to continue Veil in future series and that's a good thing. Although this story has found a natural conclusion, Rucka and Fejzula still have a great deal of fertile thematic and dramatic material to explore. Veil is a damning commentary on gender and the treatment of women, and a necessary one at this moment in pop culture. It uses horror to explore our basest impulses and offer some small flicker of hope. At the end of this issue, Dante reveals that doing the right thing is every bit as simple and straightforward as it ought to be. That conclusion makes for a powerful statement by Rucka and Fejzula.

REVIEW: Veil #5 - "A Damning Commentary on Gender and the Treatment of Women"