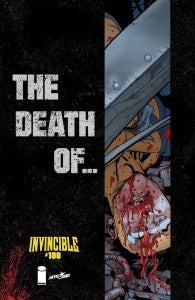 Throughout the week, Skybound has been releasing a series of teaser images (five in all) featuring various different characters from the Invincible universe, splayed or fighting and bloodied, featuring a tagline teasing the upcoming Invincible #100.

Following a Monday poster that featured Mark Grayson (Invincible) himself, the week pressed on with a series of one-sheets featuring popular characters Allen the Alien, Robot and Atom Eve...and then today we got Oliver Grayson, also known as Kid Omni-Man, Invincible's half-brother and heir to their father's powers and name.

Omni-Man himself, meanwhile, made a surprise appearance in the final pages of Erik Larsen's Supreme this week, and will square off against the title character in the next installment.

Robert Kirkman, who writes Invincible with artist Ryan Ottley, recently passed the one hundredth issue of his long-running, fan-favorite series The Walking Dead; that issue featured the death of a major character and was the best-selling single issue comic in the American direct market since 1997.

Which of these characters will die (or will it be another entirely, with these being a massive tease)? It's hard to say. Kirkman has certainly implied, for example, that there's no real need for Mark Grayson to always headline the book (as when there was a substitude Invincible recently).

“All of the characters that appear in Invincible are important,” Kirkman told ComicBook.com in an interview back in May. “While I didn’t have a plan early on to replace Mark Grayson as the lead in the series, I always strived to make all the characters interesting enough that they could carry the series for an issue or two if need be.”

Of the idea that Invincible can (like his Image Comics stablemate Savage Dragon) be replaced and the title still carry on, Kirkman said, “I love the idea that Invincible is more about the world he lives in than he himself.  That way myself and the kick ass creative team Ryan [Ottley], Cliff [Rathburn], John [Rauch], Rus [Wooton] and Cory [Walker] get to do cool, random stuff from time to time to shake things up.”

Robert Kirkman's Invincible: The Death Of...