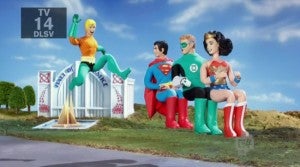 A new, two-minute trailer for the forthcoming Robot Chicken: DC Comics Special has appeared on IGN's YouTube channel, and can be viewed below.

Playing on conventions from the Super Friends TV series, the show features dozens of characters ranging from the obvious (Superman, Wonder Woman and Green Lantern) to the obscure (Red Tornado, Booster Gold and a few of the lesser-known Green Lanterns), as the Legion of Doom sets out to take down the Justice League once and for all, with hilarious results.

The key to their hopes?  A traitor from the other side. In an interview with Attack of the Show last month, Robot Chicken co-creator Seth Green discussed the decision to make Aquaman a villain in the story.

“I’ve always felt like Aquaman gets a little bit of a bad rap,” said Green. “He’s the butt of so many jokes. Any attempts to make serious or give him pathos have just been been met with an audience that wants to laugh at him so we thought we’d meet that really head on and just have him dissatisfied with his treatment and exact revenge on the Justice League. In this he joins the Legion of Doom.”

The special will air September 9th on Adult Swim.