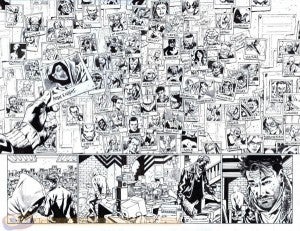 Over the last few weeks, there's been a flurry of activity surrounding ROM, the Spaceknight owned by Hasbro who starred for quite a while in a Marvel Comics series.

Following a number of trademark and copyright renewals by Hasbro geared toward ROM and related items, Hasbro appeared to be cornering the market on a ROM comic book series earlier this month, leading some to believe that there may be a remake or reboot in the works.

Shortly thereafter, the comics internet pointed out that the character appears in a piece of art promoting Marvel's upcoming event comic Age of Ultron. That seemed to clinch for a lot of fans that ROM, who had crossed over with a number of Marvel characters over the years and so was much more a part of the Marvel Universe than other Hasbro properties like G.I. Joe and Transformers, would be back in the near future.

Not so, says Marvel's own Tom Brevoort.

"Not at the moment, no," Brevoort answered when Brevoort was asked directly about the possibility on his Formspring account. When a fan playfully pointed out the apparent cameo in Age of Ultron, Brevoort didn't respond.

Of course, something like a single-panel appearance in the background of a group shot isn't exactly copyright infringement...or at least it's never been pursued that way before. Superman has appeared in numerous Marvel Comics, albeit as Clark Kent and never specifically named, and Spider-Man has appeared in DC and Image books in the same way over the years. Back when Hal Jordan first went crazy in Green Lantern comics in the 1990s, writer Peter David included him as one of the patients in a lunatic asylum in an issue of The Incredible Hulk. These kinds of things are generally playful Easter eggs, and not the stuff of inter-company conflict or litigation. The timing of the two events--news of Hasbro's trademark renewals and Marvel's tease of a kinda-sorta cameo just came so closely together that people got excited for what was likely never an actual thing that was going to happen.

Still, the specific trademark renewal for ROM as it pertains to comic books is interesting. With G.I. Joe and Transformers relaunching soon, and a hugely successful #1 on the way for My Little Pony: Friendship is Magic, maybe IDW could be looking for more comics-friendly Hasbro properties to mine. Stranger things have happened.

ROM Will Not Appear in Marvel Comics Anytime Soon