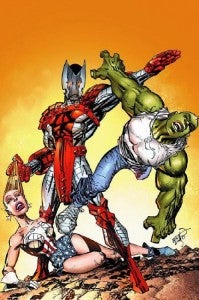 While Malcolm and Angel Dragon have been the lead characters in Savage Dragon, the book created to suit their father, for a while now, it's rare that we go a whole issue without seeing Dragon at all.

This month, though, he's nowhere to be found as Angel starts to consider the next step in her life and Malcolm takes on Overlord, the end result of all of which is that when Dragon does finally arrive home soon, he's not going to particularly like what he sees there.

Gavin Higginbotham and Erik Larsen joined ComicBook.com for our regular commentary on the issue. Spoilers ahead, folks--this is meant as a complement to the book!

This issue marks the end of the resurrection storyline. Considering your passionate dislike for comic resurrections, this always felt like an odd development to tease. Did you ever really consider bringing back any of the many characters you've killed over the years?

Part of that is me just screwing with the readers. There's always this contingent that likes to put Savage Dragon up on a pedestal and hold it as a higher standard. They'll compare it with Marvel and DC's revolving door policy where death is only a temporary inconvenience. It's kind of fun to tease them and hint that I might pull off that same thing. But yeah--it's not really my bag. Every time I've resurrected a character I've regretted it.

WarGod's death here marks another passing of one of the older remaining villains. You're slowly getting them all, eh? Ha!

They won't all go, of course, but part of the beauty of this book is that I can count on myself to come up with new characters. I don't need to keep reusing the same handful of guys over and over.

Malcolm and Thunder-Head are brothers?! Wow, this certainly raises Thunder-Head's profile as the half-brother to the main character. Could he be on his way to becoming Malcolm's nemesis? Or newest ally?

It could go either way, really.

Is it actually more likely that Thunderhead will bounce back than it is he'll do something truly horrible and Malcolm will feel responsible?

I don't want to start predicting the future as I do have some inside knowledge when it comes to upcoming stories. I will say that Thunder-head's story is not over yet.

And Rapture had a fling with SkullFace? This a result of her being crazy?

No. It would have had to have happened long before that. Previous to anything we've really seen. Otherwise the math doesn't work. Thunder-Head has to be in his early twenties at the minimum. Since there's no firm date on Rapture's origin there's some wiggle room there.

Powerhouse is an iconic villain--was there a particular reason behind using him as one of OverLord's supporters?

It's in his nature. Powerhouse has always straddled the hero / villain fence. That kind of philosophy just makes sense to him.

Age has caught up with Dung! He's not been around for a few years and he's now looking much older. We've seen Cutthroat dealing with a villainous career at an advanced age, is this the start of seeing more of this type of thing? We don't usually get to see characters moving out of their prime like this, it's exciting.

We'll be seeing a lot more of this, actually. Following Dragon going on trial for crimes he committed while in Emperor Kurr mode I'll be doing a good half-dozen issues focusing on the secret lives of the super-villains and digging in deep and exploring what drives these guys--what makes them tick--and how their lives work--what their home lives are like--that sort of thing. We've seen a lot of these characters in a few issues but never really looked into their lives to see what goes on between battles. What does Powerhouse do on a Saturday night? Where does Dung live? There are a lot of unanswered questions there and since most of the old guard is in their forties or fifties it's only natural to discover that they have families that we didn't know about. This will open things up considerably and give me a whole new cast to play with.

There appears to be at least a couple of kids there among the Vicious Circle. Is that small boy with the baseball cap related to OpenFace? Sure looks that way.

Dung has always been a guy to talk first and think later. When he said "All our kids will be left orphans" he wasn't really stopping to think who he was saying that in front of. OpenFace died in the last couple years and there's his orphaned kid sitting right there.

How did somebody get these purported pictures of Malcolm and Angel?

Malcolm and Angel were in a basement with a security camera. There are, of course, no pictures that are more graphic--just more pictures which are essentially the same as the others.

The Church of Savage Dragon seems to have some comprehension issues--why would Dragon be on a cross?

He's their Christ, in a sense. He suffered for their sins and paid the ultimate price.

This seems perfectly timed, with Dragon's rant about religion last issue. Is it save to assume he's going to have some choice words for these guys?

One would think. yeah.

That said, they still think he's dead. It's going to be pretty awkward when he shows up, innit?

It'll be Easter Sunday and the resurrection of Jesus Christ all over again.

After the almost-hookup during Invasion, Angel seems to have landed pretty firmly on her feet in her relationship with Frank. Was this an effort to put to rest the questions about eventually hooking up the Dragon kids?

It's an ongoing book. There's never any "rest." He was her boyfriend before the invasion and presumably she would have been all over him if she had been trapped with him in a deserted basement. It's more of a case of her reestablishing and reaffirming their relationship. To let him know they're still an item.

That said, Frank didn't seem all too happy. If it was was a movie, I feel like he wouldn't have been emoting at all. It's almost begging for a pretty bad follow-up. Am I misreading that?

We'll see. There's more to it than meets the eye. Nothing is in the book by accident. Every line is written purposefully. Often things will come back and you'll be able to look back and see what was foreshadowing.

Is there some significance to the August 22 birthdate? It's already passed obviously, so the book is ever so slightly behind.

It's what I had established as her birthdate and I didn't want to just skip over that just because the book is running late. There's a natural place where I can play catch up in a few issues. It'll all work out.

That last page is a real bitch. Even if Malcolm walks away from it, I can't imagine that's going to go over well with Dragon returning to Earth.

We shall see, eh?