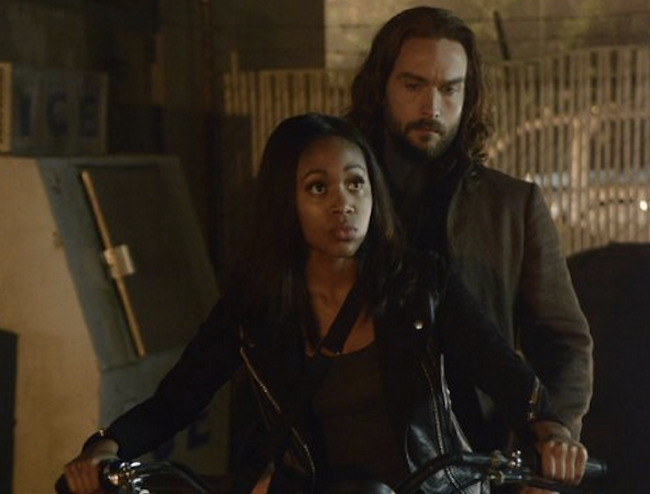 This episode of Sleepy Hollow, “The Akeda,” opens with Abbie (Nicole Beharie) and Ichabod (Tom Mison) on their way to the Manor, with demon-killing Enoch’s Sword in the back of the car. The oncoming apocalypse has forged a very real storm, and when lightning strikes their vehicle, they’re forced to steal a motorcycle. When they get to the Manor, the find the place deserted. They find an elaborate map that has each place Henry has “struck” marked, and when they connect the dots with a string, it forms a pentagram.

Suddenly, they hear Katrina (Katia Winter) scream. They find her tied up outside with the Headless Horseman, who is about to conduct the binding ritual, marrying her to him. Ichabod attacks the Horseman with the Sword, and in the ensuing swordfight, Ichabod breaks the axe in half. Abbie unties Katrina, who uses an enchantment that allows Ichabod to see Abraham’s face.

Abraham (Neil Jackson) warns them against using the Sword, saying that if a man kills another man with it, the killer’s soul is taken to Hell. They hold Abraham hostage inside, while Jenny (Lyndie Greenwood) researches the sword and finds his words to be true. However – she proposes an idea. Captain Irving’s soul was taken by Henry, so if he were to use the sword, he would have no soul to be taken from him.

At the Manor, Katrina reveals that she has real feelings for Abraham, without realizing that Ichabod can hear her. She then tells Ichabod that she thinks the Irving plan will work. The two worry that they might be unable to kill their son Henry if he stands between them and Moloch. 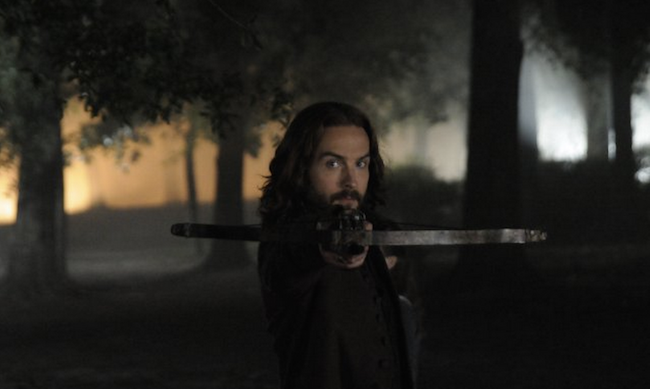 Jenny re-examines her voicemail from Irving (Orlando Jones), and they realize that he left a code for them at the end, leading them to a tunnel under a military post in town where they find him. They explain the situation with Enoch’s Sword, and he agrees under the condition that they vow to protect his family should he die. They go back to Abraham, where Irving threatens him with the Sword unless he gives the details on Moloch.

Abraham tells them that Moloch is at the Four Trees in the forest, which are no longer very white. They will darken one by one, as the first one already has. The first tree brought lightning, the second will bring blood, the third will bring Moloch’s demon army, and the fourth will bring Hell on Earth. Irving wants to kill Abraham once they get the info, but Katrina stops him.

They reason that they will all need much more weapons, so Ichabod and Jenny locate Hawley (Matt Barr) at a bar. He’s skeptical about the end of the world – until it starts raining hail. He agrees to give them every weapon that he has. Some of his ancient weapons require some magic, but thankfully, they have Katrina to set them off. Lastly, they bring Hawley to the Headless Horseman and essentially ask him to babysit. Abbie makes sure he understands the gravity of the situation, and they leave him there.

Elsewhere, Ichabod reveals to Katrina that he heard her telling Abraham about her feelings for him. She insists that everything she does is to promote their survival, but that’s not enough for Ichabod, who is now “questioning the very idea” of their marriage, listing her multiple deceits. Their argument builds until they agree to remain only “comrades in arms” until Moloch is defeated.

In the woods, the third tree finishes burning, and Moloch (Derek Mears) summons his demon army. Henry’s eyes go black, as he goes into the body of his alter ego, the Horseman of Death. Abbie, Ichabod, Irving and Jenny are on their was to the Trees when the demons start shooting at them. Abbie is shot, and Jenny takes her away. The others fight off various demons until the Horseman of Death himself appears. 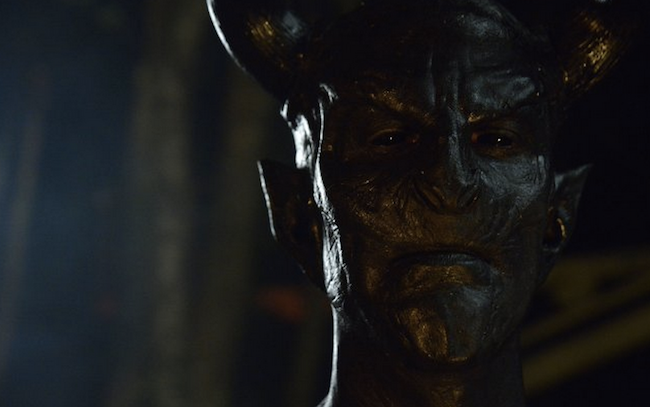 Irving and the Horseman of Death fight valiantly, and Irving chops off the Horseman’s arm. Henry is correspondingly shown losing his arm back at the Trees. Irving eventually slays the Horseman, but he leaves the fight cut deeply. Katrina is unable to heal him with her magic, and he dies. They return to Abbie who is being bandaged by Jenny. Abbie is distraught over Irving’s death.

They are ready to soldier on in honor of Irving, when Ichabod and Abbie begin to argue about the Sword. She insists that she be the one who sacrifices her soul, after what has happened to her friend, Captain Frank Irving. They slowly agree to each take turns with the Sword. If one falls, the next will take it up, until they are all dead, if need be.

Moloch orders Henry to delay the group, even though he is vulnerable now without an arm. Henry is hurt that Moloch would sacrifice him so easily but obeys. He enters their building and meets Abbie, whom he constricts with roots. Jenny appears next, shooting him in the shoulder, but he constricts her too. He picks up what thinks is the sword, but it disappears in his hands when Katrina speaks an enchantment. Ichabod holds the real sword at Henry’s throat. They will have to kill him to progress to Moloch and save humanity.

Ichabod begs Henry to let him pass, so that they may kill Moloch, which would kill Ichabod in turn, and so that Henry can go free. In Ichabod’s moment of weakness, Henry quickly brings his hand to Ichabod’s throat and steals the Sword. He takes them all to Moloch, who is waiting.

Moloch tells Henry that he must kill Katrina for the fourth tree to burn. Henry doesn’t want to kill her, saying it should be Abraham, but Moloch demands that he sacrifice his mother. Ichabod offers himself in Katrina’s place. Henry stands in front of Ichabod, ready to strike, just as he spins, and kills Moloch instead.