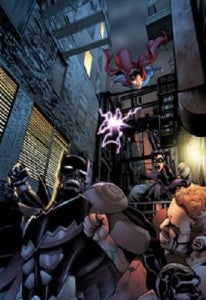 Eagle-eyed observers at the popular blog DC Women Kicking Ass noted earlier in the week that a teaser image from an upcoming episode of Smallville Season 11 appeared to show a female Robin fighting alongside Batman, who was making his own first appearance in the world of Smallville. Now, series writer Bryan Q. Miller has confirmed to TV Guide that Batman's sidekick is a woman in the new series--but denied that it's Robin.

Nope, that's Nightwing you see on the page there and it is--as odd and unlikely as this is--a payoff from a fantasy sequence seen in an issue of Miller's run on the pre-Flashpoint Batgirl title for DC's main publishing line, featuring former Spoiler and Robin Stephanie Brown.

"Bruce can be somewhat of an angry man," Miller explained of his decision to use Brown instead of either Dick Grayson as Nightwing or one of the other Robins in an interview with TV Guide. "Stephanie's personality is so can-do and unsinkable and bright, so it's very much on purpose on Bruce's part that he has a good cop going out on patrol with him every night."

Miller explains that while Bruce has been operating as Batman for slightly longer than Clark has been operating as "The Blur," his TV identity from before he adopted the name Superman and started appearing in public, it's a years-old cold case that brings Batman and Nightwing to Metropolis: they're following a lead regarding the murder of Batman's parents.

With the timeline reset, Stephanie no longer operating as Batgirl and Smallville taking place in a different reality either from Miller's Batgirl or the currently-published titles of the New 52,  this is probably one of the least likely opportunities that a writer could have to pick up on a plot thread, but if it means more of Miller's fan-favorite approach to Stephanie Brown, it seems likely it'll fare alright.

Smallville Gets a Batman...And a Female Nightwing