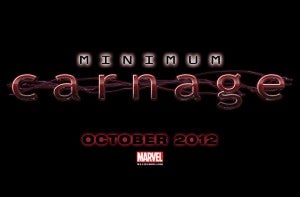 In a cryptic visual teaser, Marvel Comics is teasing "Minimum Carnage," something that will be rolled out at the Amazing Spider-Man panel at next weekend's San Diego Comic-Con International. The title is an obvious reference to Maximum Carnage, the fan-favorite Spider-Man mega-story from the '90s that featured the Spawn of Venom gathering villains to take on Spider-Man and a group of heroes. The story later inspired a 16-bit video game by the same title.

Of course, it might be a Spider-Man event at all, per se. Venom--now Flash Thompson, not Carnage's former cellmate Eddie Brock--has his own title now, and was a key part of Carnage's last big storyline.

The logo itself looks more like something you'd generally find in an animated series or video game than a comic book, but with new trade dress and a more "cinematic " look, it's entirely possible that this is just what a new comic book teaser looks like in the context of Marvel NOW!.

Whatever it is, we'll find out Sunday, July 15th  at the Amazing Spider-Man panel, 12:30PM PST, during Comic Con International 2012...and then you'll know about a minute after that!