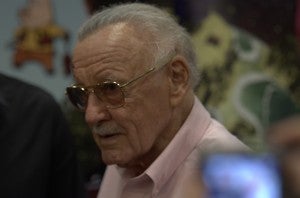 Excelsior! Last week, the Producer's Guild of America announced that the next recipient of their prestigious Vanguard Award (given in the past to George Lucas and John Lasseter in recognition of their lifetime's contribution to Hollywood) will be Marvel Comics visionary Stan Lee.

Lee, credited with creating or co-creating dozens of Marvel characters including Spider-Man, Iron Man and the X-Men, will receive the award at the 23rd Annual Producers Guild Awards ceremony in Los Angeles this January.

“Stan Lee’s creative vision and imagination has produced some of the most beloved and visually stunning characters and adventures in history,” said Producers Guild Awards co-chairs Paula Wagner and Michael Manheim in a statement to Superhero Hype. “He not only has created content that will forever be in our culture but continues to make strides in the digital and new media realms, keeping the comic book industry fresh and exciting."

The Vanguard Award is apparently meant to recognize achievements in new media and technology, according to the Superhero Hype article, so it's hard to see exactly where comics fits in alongside the creators of Pixar, YouTube and RealD. Still, Lee had been credited as a producer on most of the Marvel films, including all of the current "Marvel Universe" films which, beginning with Iron Man, have been building toward the release of 2012's The Avengers, widely regarded as the most ambitious superhero film ever made. His IMDb page also cites him as a producer on upcoming film adaptations of Nick Fury, Agent of S.H.I.E.L.D., Deadpool, Doctor Strange and Shang-Chi, Master of Kung-Fu.