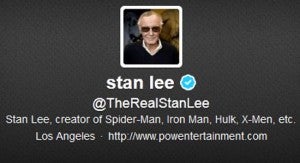 4. While we get the connection of why celebrities like Seth Green and Jon Favreau tweeted Happy Birthday to Stan Lee, we didn’t realize that Hannah Montana was also a fan.  Miley Ray Cyrus tweeted, “#Happy90th birthday to @therealstanlee Love you so much!” Further proof that everyone in the entire world knows and loves Stan Lee.

3. Of course, while most point to Stan Lee’s work creating Marvel Comics characters, others remember him for other reasons. Steve Amiri tweeted, “Happy 90th Birthday to Stan Lee. Lee is most famous for his role as mailman Willie Lumpkin in the Oscar winning film, Fantastic Four." Yes, it was a joke, but a rather good one.

2. Did we say everyone in the entire world knows who Stan Lee is? Well, perhaps our statement wasn’t broad enough, as Stan Lee’s popularity isn’t restricted to Earthly boundaries. God tweeted, “Happy birthday, Stan Lee! You're 90 years old but you look near-mint.” Yes, when you’re Stan Lee, even God acknowledges your birthday.

1. However, our absolute favorite Stan Lee birthday tweet comes from “the Man” himself. No one can upstage Stan Lee on his birthday. In response to Amazing Spider-Man writer Dan Slott’s birthday wish, Stan Lee tweeted, “@DanSlott what a gift, some guys give a nice cigar, a watch, but no not you, I get a dead #PeterParker Thanks for the bday wishes my friend!” And when Slott tweeted back that he was printing the tweet out to put on his refrigerator, Stan Lee tweeted, “@DanSlott at lest you'll have a good price of writing in your house. Ha. Keep up the amazingly spectacular work you always do!” Zing!