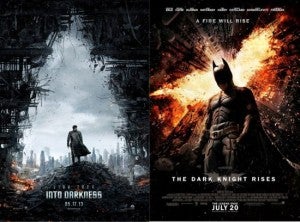 During an interview with Collider that ran earlier today, Star Trek Into Darkness co-writer Damon Lindelof was asked to explain how tightly connected the upcoming sequel will be to the Star Trek that J.J. Abrams directed a few years ago. By way of explaining it, he went a great deal into the nuts and bolts of Batman Begins, The Dark Knight and The Dark Knight Rises, which might seem a bit aribitrary but actually makes perfect sense in context. "While we were making the first movie there were certainly conversations about what a potential sequel would be and how closely tied to the first movie that it would be," Lindelof explained. "For example, the idea of saying let's just tie the second movie entirely to the destruction of Vulcan because that's a big deal and many tributaries of story could flow out of that. Should we do that? Or should this in many ways feel like The Dark Knight where you need not have seen Batman Begins at all in order to understand the circumstances in which The Dark Knight opens. The Dark Knight opens much in the same way that Tim Burton's Batman opens which is Batman is living in Gotham and he is an established figure there and he is beating up bad guys. This is an introduction to a new bad guy who is creating all sorts of problems for Batman. So if you've seen Batman Begins there are really no references back to it other than Rachael, and she's been recast, so you understand that Maggie Gyllenhaal, or Rachael and Bruce have a relationship, but you may not have seen the first movie. "In fact, maybe it helps you to attach to Bruce and Rachael's relationship more if you haven't seen the first movie, but in the third movie, Dark Knight Rises you have to have seen Batman Begins in order to make any sense of it whatsoever. I think the conversation that we were having is, we're going to have to pay for what we did in the first movie because it's a big deal. Do we want to pay for it now, or do we want to pay for it later? That was the first creative conversations that we had related to a potential sequel. Then the movie came out and it did well and Paramount wanted to make another one so we started to get excited about some of the ideas that we had and started developing them further."