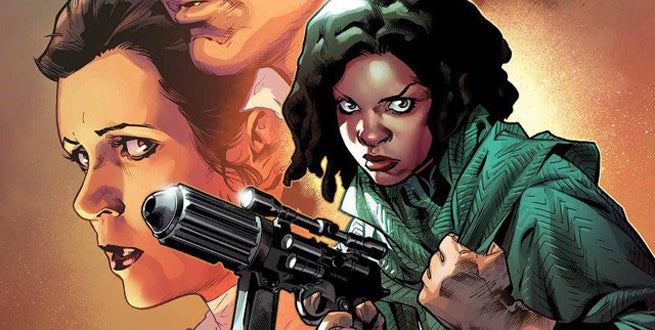 Where do we begin with Star Wars #6, today's release from Marvel Comics, the final issue from the initial creative team of Jason Aaron (who is sticking around) and artist John Cassaday (who is not)?

Well, we begin with a major SPOILER WARNING, because the events of this issue have massive implications for the whole of the Star Wars franchise. We can't emphasize enough: If you are a Star Wars fan, please read this comic book before you read this article. We'll wait. Okay, you're back? Holy cow, right?

Let's bury the lede a bit and talk about the slightly smaller revelations in this issue. The fight between Luke Skywalker and Boba Fett is nothing short of epic, and if you weren't angry when each scene cut hit, desperate to speed forward for the rest of their battle, then you probably weren't reading this comic. But it had mythological reasons for being important: Of course, the last time Luke and Boba are in the same place, it's Luke who is seemingly in danger and Boba who winds up… not so well. Here they are a solid match for each other, despite Luke's nascent Force abilities. This is the first official (chronological) canon time that Luke uses the Force for telekinetic purposes, crashing a box into Boba Fett. The next time he does this (and the first time more than just instinct) is in the pages of Heir to the Jedi, when on a secret mission for the Rebellion he moves a noodle – this is slightly more exciting. On film, he does it for the first time when he pulls his lightsaber to cut himself free of the Wampa's icy cavern, but I digress.

The issue also marks a, possibly more significant occasion, as Darth Vader learns that the young pilot who blew up the Death Star is related to him. As Boba Fett tells the Sith Lord that the pilot's name is "Skywalker," you have to wonder how much Boba knows about Vader; he had some knowledge of Anakin Skywalker back during the Clone Wars (as seen on the TV show of the same name); it's an exciting prospect to find out more about in this series and the Darth Vader title. Oh, and Vader knowing Luke's lineage? Well, you've seen Empire and know how that turns out, don't you? 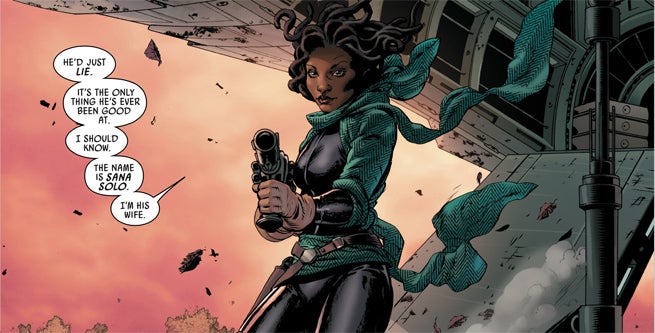 Sana Solo is wholly new to the new and current Star Wars continuity. In the original films, no such relationship was ever mentioned or even hinted at; Han Solo and Leia Organa had their burgeoning relationship, and it was punctuated by a pair of "I love you." "Iknow" moments. In the old Expanded Universe, now known as the out-of-continuity stories called "Legends," Han Solo had a wife: Leia! They had a few kids and their own crazy adventures (he also had an ex-girlfriend who was also a smuggler… just, don't worry about it) – but again, that's not the story anymore, nor here.

So who is Sana Solo? Well, unfortunately, we don't have a lot of insider information for you here. Sana appears on the cover of August's Star Wars #9 (the series double-ships in July, including a standalone issue featuring Obi-Wan Kenobi, presumably alive and not as a Force ghost). The solicitation text tells us less than this issue does, merely mentioning she's a "mysterious woman from Han's past!" #8 is similarly cryptic, merely saying "Han and Leia are confronted by an unexpected foe!"

Han's reaction, likewise, doesn't tell us much just yet. It seems to be one of exasperation (hand on his head, and his only words are "Oh no."), rather than utter panic, perhaps indicating that Sana's claim is slightly dubious. It could be she's an ex-wife that has never quite accepted the breakup. Maybe they considered themselves "married" without any real ceremony.

Important here, mostly, is that this continues to show the confidence Lucasfilm and the Story Group has in the comic book corner of the universe. It is significant enough for them to give/allow a fight between such major characters as Boba Fett and Luke Skywalker. It's impressive to see Luke use the Force telekinetically for the first time. It's chill-inducing to see Darth "Anakin Skywalker" Vader react to finding out definitively that the young pilot he feels a connection to is his kin. These are huge moments that Lucasfilm is trusting to Marvel Comics.

But bringing in a brand-new character, and instantly giving her such relevance as being the wife of Han Solo is unprecedented. Again, in the new Disney-run Lucasfilm, everything, from films to TV series to comics and novels and even the storylines of video games are considered 100% canon. If a character is introduced on a comic book page, she can then be used in novels, or an Anthology film, or show up on Rebels. And it's the same across the board. Introducing Sana Solo (note: I love that her name almost rhymes with and is certainly evocative of Han) in the pages of this comic, and doing it without any real answers for at least the next month or two, instantly says to fans: Marvel's Star Wars comics are the real deal.

Incidentally, the importance of the moment is punctuated by Sana being a woman of color. Outside of Lando, there aren't a lot of non-white, non-alien people wandering around the Star Wars galaxy. A major character coming in and being just that is a step in the right direction for the diversity of the franchise. Of course, it also raises even more questions about Star Wars: The Force Awakens, coming less than 200 days from now. Everyone has been wondering if Daisy Ridley's Rey is the child of one of the original trio, but does this reveal mean John Boyega's Finn could have a direct connection to one of them, too? Well, it sure makes us wonder, and that's when Star Wars is at its best, when it initiates the wonder of the child within everyone who experiences it.

Star Wars #6 Spoilers: Who's That Lady? Canon For Han Solo Gets Big Change