The Star Wars: The Force Awakens trailer is finally here, making the next 12 months between now and the film’s release all the more slow and agonizing. But with a trailer like this one, we can definitely say it’s worth pain. The first taste of J.J. Abrams’ Star Wars chapter was undeniably filled with some cool moments. From X-Wings to lightsabers, there was a little something for every fans of the galaxy far, far, away.

While everyone will have their favorite, here are our top five picks for the trailer's coolest moments. As the Force awakens, so does our appetite for more Star Wars footage.

The Sith always get the coolest lightsabers, huh? The trailer showed what was most likely a Sith lord stumbling through the snow before firing up his blood-red lightsaber. Fair enough. But…wait for it…a cross blade popped out of each side of the handle. Let’s call it the “crosssaber.” While we thought Darth Mauls double-edged lightsaber was the coolest weapon on this side of the galaxy, the mysterious new Sith Lord’s sword just raised the bar. Get ready for some awesome lightsaber duels ahead.

Now there’s a fond and familiar sight. The prequels always lacked the iconic spaceships that helped define the original trilogy. Bringing back the X-Wing marks a true return to form, giving us interstellar vehicles we could spend all day staring at. Here’s hoping that the X-Wings get plenty of screen time in The Force Awakens. They have a lot of lost time to make up for. And on that note…

3) So Does The Millennium Falcon Returns!

Han Solo’s signature ride is back, and we couldn’t be more thrilled. Seeing one of our favorite Star Wars ships unleashed with modern CGI technology is going to be a sight to behold, especially when it engages in a dogfight with some Tie Fighters. And if the Millennium Falcon is getting a starring role, that can only mean Han will carry a big presence in The Force Awakens as well. Or at the very least, Chewie.

Daww, J.J. gave us a new little droid to fawn over. This rollerball droid is a pleasant departure from the typical droid designs, showing that The Force Awakens won’t be afraid to break from script and experiment some truly original designs. Who knows what this droid is capable of, besides making cute beeps and boops that would make R2-D2 jealous. 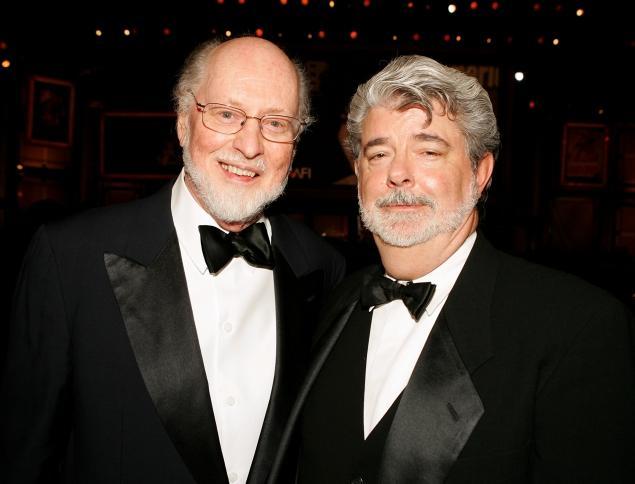 Sure, we’ve been hearing John Williams’ Star Wars theme song for more than 35 years. But when the trailer dropped the iconic score, to the sight of the Millennium Falcon tearing through the sky, it was like listening to the first time all over again. You’re either A) Jaded B) In Denial or C) Deaf if those blaring horns didn’t send goosebumps jolting up your spine.

But what say you? What were your favorite moments from the trailer?