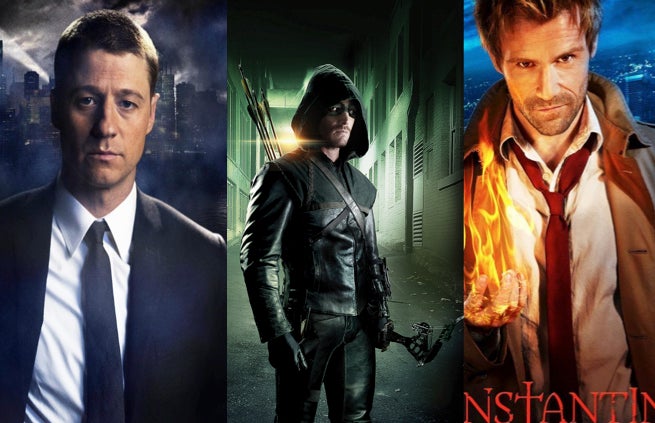 If Arrow actor Stephen Amell had his way, his character would cross over with every other DC Comics character currently on television.

Coming off of his current crossover with the The Flash, Amell told USA Today that DC’s televised characters shouldn’t be limited to their networks. The Flash and Arrow are only able to share a universe, and crossover for guest episodes, because they both air on The CW. That’s not the case for DC’s other programs, Gotham, which airs on FOX, and Constantine, which airs on NBC. Due to legal stipulations, no character could ever cross over from one network to the other. It would be like Mickey Mouse appearing in a Looney Tunes episode.

Of course, Amell doesn’t see it as such a black and white issue, arguing:

“I know the logistics are challenging and the politics are above my pay grade, but in the interest of putting the best product forth for the fans, I don’t think we should limit ourselves to Flash and Arrow crossing over because we’re both on the CW. If you’re owned by Warner Bros., or if you’re just in the DC Universe, everything should be in play.”

Logistics aside, Arrow could never really cross over into Gotham anyway. Since that show takes place 12 years into Batman’s past, the world of Arrow and The Flash isn’t properly aligned. It wouldn't be such a far-fetched proposition for the less-grounded The Flash, however. Everybody knows how much the Scarlet Speedster loves his time-travel.

But Flash’s Grant Gustin said he has his eyes on an another crossover; one with much more romantic potential. That would be CBS’ upcoming Supergirl series, with Arrow and The Flash executive producer Greg Berlanti is running. Then again, Barry’s love life is tough enough as it is, with failed romance with Flash’s Iris West and Arrow’s Felicity Smoak.

““Oh God,” Gustin told USA Today. “He doesn’t have enough love interests that aren’t going to to work out.”