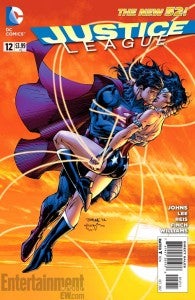 When Dan Jurgens talked to us about Superman #11 last month, we discussed Lois Lane's boyfriend, a character who never existed prior to the New 52 but who DC was invested in keeping in play during Jurgens' run on the title.

Well, now Superman may have a new love interest as well, according to a new Entertainment Weekly story that exclusively debuted a new cover of Justice League #12 that's got 100% less Aquaman than the previously-solicited version of the cover and quite a bit more PDA going on between the Last Son of Krypton and a certain Amazon princess.

According to solicitation text, the issue features "A shocking last page that will have the world talking about this issue!", and now we probably know what it is.

“This is the new status quo,” says series writer and DC Chief Creative Officer Geoff Johns, adding that the relationship between the two will have a far-reaching impact in the DC Universe.

It's also, presumably, a way to get one of fans' top wish-fulfillment fantasies out of the way before Superman eventually settles down into the life he had before The New 52.

That photograph has been mimicked dozens of times, including notably in the 2009 Watchmen film adaptation made by DC Entertainment's parent company Warner Brothers, who also own Entertainment Weekly.