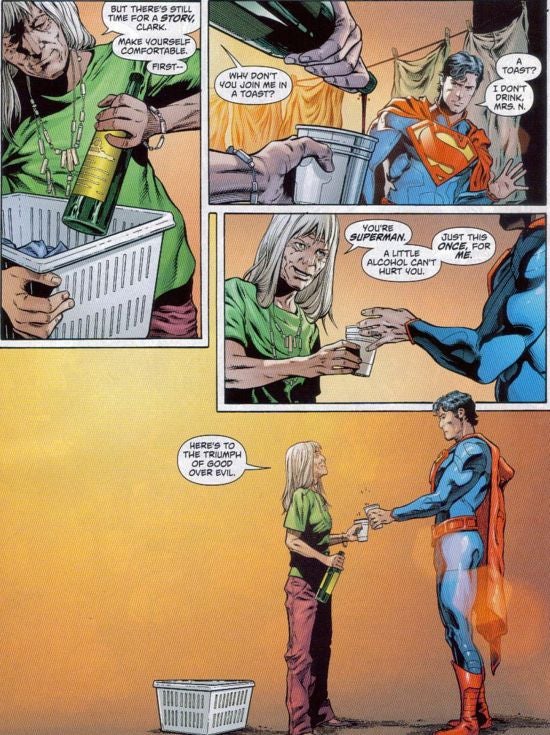 Back in the old DC universe, DC Comics was so nervous about the perception of Superman drinking alcohol that they recalled Action Comics #869. The original cover for Action Comics #869 showed Clark Kent (with his Superman "S" emblem visible) drinking what looked to be a beer with his dad.  DC Comics recalled the issue, adding the label "Soda Pop" to the bottles to make it clear that the Man of Steel was not drinking an alcoholic beverage. My, how times have changed. With the New 52 version of the DC universe, DC Comics doesn't appear to be such a stickler about Superman not drinking. In Action Comics #15, Superman shares a toast with his elderly landlady. Oh sure, Superman tries to resist. He tells her, "A toast? I don't drink Mrs. N." But the Man of Steel is no match for Mrs. N's overwhelming charms. Mrs. N says, "You're Superman. A little alcohol can't hurt you. Just this once for me." Superman giving in to peer pressure and taking a drink? What will the kiddies think? Isn't why don't you try it just this once the line used in pretty much every public service message against drinking and drugs? Evidently, Mrs. N hasn't seen Superman III (and we can't really blame her on that one). While Superman might have avoided alcohol in the comic books, the same has not always held true for the movies. And it's not a pretty site when the Man of Steel drinks. A little alcohol can't hurt you, indeed.