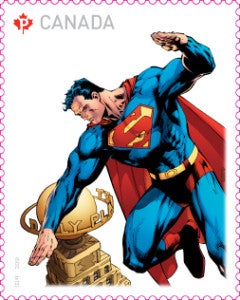 Ninety-nine years ago, Superman co-creator Joe Shuster was born in Toronto, Ontario, Canada--and this weekend, the Canada Post will honor his most famous accomplishment by releasing a run of Superman postage stamps in time for the character's 75th anniversary.

The stamps will be displayed for the public for the first time at Fan Expo Canada--in Toronto.

"Canada Post is excited to honour the world’s first super hero and his super fan base with a new set of PERMANENT™ stamps," the Canada Post said in a statement. "Join Canada Post as we say ‘Happy Birthday’ to Superman and pay tribute to the talented artists who have worked on his image over the years."

The "Permanent" stamps are, like the U.S. "Forever" stamps, exactly what they sound like--stamps that will be honored even if postage goes up.

Fan Expo Canada visitors will get an exclusive first look at the Superman stamps, which will be officially issued September 10.

Fear the Walking Dead Recap: What to Know Before Watching “In Dreams”