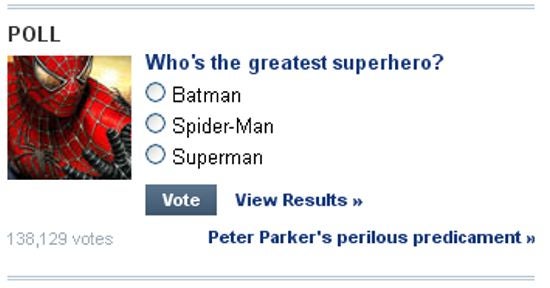 This has to be good news for Warner Bros., which plans to release the Superman reboot Man of Steel next summer. Yahoo is conducting a poll on their home page asking the question, "Who's the greatest superhero?" Respondents can select between three superheroes: Batman, Spider-Man, and Superman. The poll seems to have been triggered by all the recent news on the death of Peter Parker. The poll contains an image of Spider-Man and a link to an article on Peter Parker's perilous predicament. Even though one might suspect the image and the article would stack the poll in favor of Spider-Man, Superman is actually leading the poll by a very large margin. While there have been many superhero polls done in the past, this Yahoo poll is significant because it appears on Yahoo's home page, which has led to over 138,000 votes being cast already. At the time of this article, Superman leads with 68% of the vote, followed by Batman with 22% of the vote, and Spider-Man is dead last with only 11% of the vote. 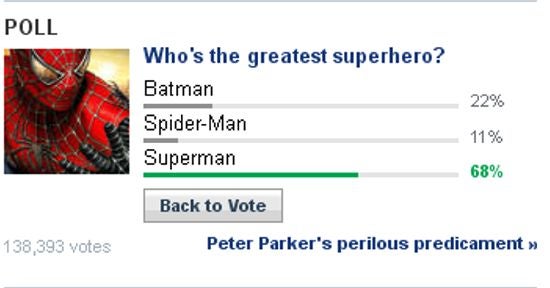